When I think back to my frightening diagnosis of an invasive, aggressive ductal form of breast cancer in 2008 I remember thinking “So if this it?”

I was in my late fifties and suddenly it felt like the rug had been pulled out from under me. John and Mandy had just gotten married, Walsh was out of school and working…Tommy was in college…it just didn’t feel right that the ending to my story would come about with so many loose ends still dangling in the air.

By the time the kids threw a big 60th birthday for me…a year and a half later… I had just gotten the amazing news that I was going to become a grandmother. So I wasn’t planning on going anywhere!  (Believe me…God would have had to drag me out kicking and screaming…that child’s birth was  a rebirth for me.)

I kept a diary of the time I spent waiting for her to arrive-  a diary about all my dreams for her-…which I later gave Mandy and told her to keep and give  Eva Cate on her 18th birthday or graduation night. And now look…Eva Cate is ten years old and ole’ Boo is still around.

Little did I know that her birthday would be a domino effect that would bring me in contact with St. Jude’s Chapel of Hope in Trust, NC followed by the beginning of the blog…Chapelofhopestories.com on August 7, 2010.

It all began with a huge leap of faith coupled by lots of family help and friends’ encouragement…From day to day I was clueless about what to write the following day…but God was holding my hand and let me know He would give me ideas if I would just start typing…and for over a decade now that is what happens every single day.

The first day’s post (2010)…my explanation of the God Wink that lead to this amazing adventure that has proven to be my life-line in my passion and love of writing.

The Chapel of Hope Connection 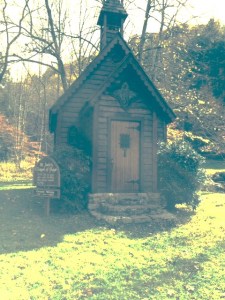 I realize for some of you new readers…you might be wondering why I chose the title for my blog as: Chapel of Hope Stories. It’s a good question and the answer is one that produced a life-altering detour in my journey.

I will have to take you back in a time-capsule to July of 2010…the year I first saw St. Jude’s Chapel of Hope in Trust, North Carolina. I had been fighting breast cancer for two years at the time…having already had two surgeries, two rounds of radiation and chemo. It was an uphill battle. But, quite honestly, my thoughts were not on treatments but on my new grand-daughter, my first grandchild, little Miss Eva Cate.

She was born April 27, 2010 and you couldn’t budge me from her side. I thanked God day and night that He let me live long enough to see that beautiful symbol of new life and hope. So when my friend, Honey Burrell, called and asked me to come spend a few days in the mountains with her and her husband, Mike…I kept thinking of excuses why I had to stay home.

Finally Mike got on the phone and told me that he had discovered a special place with a special story…that he had already shown it to Honey and they both agreed that it would prove even more special to me.. He had caught my curiosity and wonder…how could I not go see this place?

From the moment Honey and I drove up the gravel driveway and I first laid eyes on the little doll-house sized chapel…I was in love. When I entered the chapel I immediately felt a presence there….warm and inviting. Newspaper articles about the creator of the chapel lined the walls and I began reading.

Beverly Barutio, a cancer victim herself, had built the chapel as a “thank you” to God and St. Jude, the patron saint of improbable (but not impossible) causes. She and her husband, Bill, had moved to the little community of Trust, North Carolina on a leap of faith. She had advanced cancer which had spread throughout her body.

Beverly prayed for time to be with her husband and family and she got it. Her cancer went into remission and stayed there for over fifteen years. Today St. Jude’s Chapel of Hope has visitors from around the world and has changed lives, like mine, for the glory of God.

When I returned home from my first sighting…I wanted to share my experiences with others whose lives have been touched by this little chapel in the woods. My son-in-law first explained to me what a “blog” was and then helped me set it up…the rest is history.

Come join me on my quest to honor Beverly Barutio for her special chapel through stories of self-discovery with God as our guide.

So until tomorrow…I want to thank all of you for jumping in the blog post transport… that takes us daily to a different little chapels in the woods through stories of others whose lives have been touched by amazing pioneers like  my special mentor and hero…Beverly Barutio.

Winnie’s “puffy” coat to help keep her warm on these cold afternoon walks… arrived while I was visiting Tuesday afternoon and she just looked too cute modeling it. I can  get a lot of loving from that teeny tiny little dog! 🙂

2 Responses to You’re Never Too Old…