My One Enduring Truth…

I had started another blog post when I heard some news from Tommy that sent me back down memory lane…and I sensed immediately that I must stop and pay tribute to all the guardian angels that God has sent me throughout this twelve-year, on-going struggle with “little c”…especially this particular angel today.

Tommy and Kaitlyn had seen this article and sadly forwarded it on to me!

“Fungie appears to have disappeared from Dingle Bay in Co Kerry… having entertained tourists for the past 37 years.”

When Anne and I traveled to Ireland five years ago and stayed in Dingle for a couple of days…we went to the marina first to get tickets to ride the boat out to see the famous dolphin, orphaned, and adopted by the town people…named Fungie! There were stories of him everywhere and even a statue to pose on….

The dolphin was already a spiritual symbol in my mind since my first meeting with one, on the jetties, at Edisto Beach in October of 2008…shortly after my surgery and while still undergoing chemo treatments.

I couldn’t sleep at Brooke’s beach house…worried about my future…or more specifically… the potential lack of…so I left the house quietly one morning to walk in solitude conversing with God about the uncertainty of the days…in which I was living.

It was a foggy morning and I was basically alone… except for one young couple much farther up the beach laughing and giggling while collecting shells. I remember wishing I had their energy and state of mind…I was just plain exhausted.

So I plopped down on the jetties and asked God for guidance…I felt so alone and lost…clueless as what direction to go. Suddenly I felt this huge presence come over me… before I visually saw anything. A dolphin  swam  into the jetties… fishing among the rocks…and leapt vertically, so high,  he was, literally, towering over me.

In shock and amazement I remember looking up up up into that big smiling face staring down at me. I found myself grinning back…his head was enormous...it appeared to be two-thirds of his body.

For that split second when we visually met eye to eye….I instantly knew what God’s message was…it was so loud and clear…it almost seemed as if the dolphin spoke directly to me telepathically.

Now seven years later (in 2015)…I found myself on a tour boat in Dingle Bay… looking for Fungie, the famous and beloved Dingle dolphin. Coincidence? NO. God Wink? YES.

It didn’t seem as if he were going to appear…the boat kept circling and all of us kept turning our heads…suddenly Anne… on the other side of the boat…pointed at me and yelled excitedly “Behind you!”

As I began turning Fungie was coming down from his vertical leap literally right behind me…almost as if he saw me and swam over…I saw the splash and his head turned slightly, as if to tell me good-bye and wish me well…before swimming off again…no doubt the same universal spirit was in both dolphins. Look how far I had come from 2008…able to take a trip to Ireland! I was “living life to the fullest.”

So what is the one truth that I will leave this world knowing in every fiber of my being…” We are all connected under the skin.” Humans, animals, plants…every living thing is connected to every other living thing.

God has given me dolphins and big red geraniums…to guide me and reassure me that life should be lived as one great adventure!

And I did make the most of my “adventure” time in Dingle, Ireland….even hanging with the local singers in an Irish pub …just let loose and danced to life and living that night.

Anne sent me a secret photo she took the day she stuck the witch’s legs under my B&B door frame…she got another root cutting from “Big Red” and sent me this photo. * Look! She already has a bud forming…”Big Red” must have magical powers…it sure has spiritual ones!

So until tomorrow…“Our guardian angels are closer to us than anything except the love of God.” 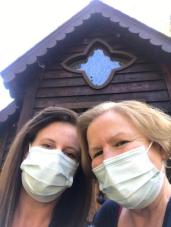 Honey sent me these photos from my beloved St. Jude’s Chapel of Hope in Trust, NC. She told me the chapel had a make-over from her visit a year prior…and this one beautiful stained window that was cracked had been fixed inside and out. Honey’s beautiful daughter, Ashley, went with her…along with their masks…always a reminder of life in 2020…physically and spiritually. 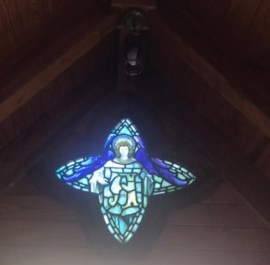 Don’t we hear, from time to time, the advice…to pause and look up…so glad I did yesterday because guess what was smiling down at me…one red leaf and a family of morning glories high up near the top of a tree. * In an abstract painting it would have resembled an apple and a cluster of purple grapes!

2 Responses to My One Enduring Truth…