The Guardian Angels in Our Childhood Toys

Can you believe it  has been a month since I started the StoryWorth Album Mollie gave me for my birthday? My fourth “Monday” question came yesterday…“What was your favorite toy(s) in your childhood growing up?” 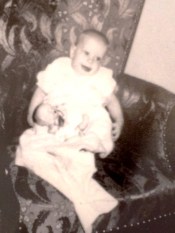 For me…my love of dolls began very early, before I was old enough to remember and (quite honestly) has never left me. I adore dolls…always have…but especially one doll for a very special reason. (me holding my doll and mother holding hers- me 🙂

Her name was Polly and this is really her story too…since we were inseparable for many years…actually…still are.

My “Polly” was a “Teri” doll manufactured post WWII in the fifties…the decade of my early childhood. I got Polly when I was five…the year my father died and my mother began her fight against bone cancer…the end result…she lost her left hand and partial arm.

My brothers and I had already started the “shuffle”…being shuffled from one aunt and uncle to another to a grandmother to cousins…on both sides…some relatives we weren’t even familiar with at that young age. I remember being so homesick and could only sleep at night if I had a satin blue pillow case to soothe me… while I sucked my thumb. 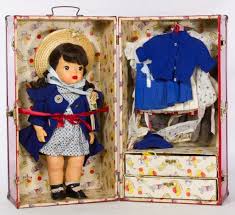 “Teri” dolls arrived in little trunks with the doll in one outfit and another outfit hanging in the trunk with them. For that time period…they were quite expensive. There is no doubt several extended family members went in to get me that doll…my guardian angel for the rest of my life.

I named her “Polly” for Miss Polly Black…one of three elderly spinster sisters who owned a Victorian boarding house in Fayetteville, North Carolina where mother boarded after graduation from business school at Winthrop. It was here  she met daddy on a blind date and married the year the war ended… we three siblings followed in quick succession.

Every Sunday afternoon mother would take me to visit Miss Polly who lived on the third floor in another world because she mentally never grew past being a little girl herself. She had lots and lots of dolls. I will never forget when I showed Miss Polly my Polly from my fifth birthday present…and told her I named the doll after her.

I am not sure she ever fully understood that…because she would ask me every time…what the doll’s name was when I came for a “tea party” visit…and when I answered “Polly” she would clap her hands in delight and say “That’s my name too!”! (Then we would both start clapping our hands…a ritual we did until the last time I visited her before we left Fayetteville to move to Laurens. (I was 13 then)

This time, however, when she asked me the name of the doll and then started clapping happily again…I broke down in tears because I intuitively knew I would never see Miss Polly again….and I didn’t …she was almost 80 when we got the news she was gone… a year after we left town.

The other sisters said that every Sunday, after we moved, she sat looking out the third story window…looking for mother and me to come…and ended up disappointed and sad…the tea set ready for our visit.

Polly the doll and I had many adventures and even misadventures together when Polly was “kidnapped” by some “bad boys” in the neighborhood ….buried under pine straw…it rained that night and by the time we found her…her arms and legs were loose from the one rubber band that held her limbs to her body trunk.

Mother actually sent her off to a doll hospital in Philadelphia (the only one at that time) we received notes telling us how much she was improving. Polly the doll left a brunette and returned a blond (I know how she felt…happens to me a lot 🙂 but I recognized her and her beautiful white dress that she still has to this day.

Eva Cate meeting Polly for the first time….and then again later…another little girl to love on her. 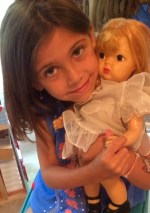 This beautiful doll came into my life at its lowest time-when I most needed a friend….five years old, confused, upset, with no one to talk to… Polly filled that empty void for me. We have grown old together (though Polly has definitely kept her youthful image much better than myself :)….There has never been a doubt in my mind that a guardian angel has always been inside that little 16 inch hard plastic body held together with a big rubber band connecting all body parts to one invisible heart.

The simplest materials are what guardian angels prefer…I believe.

* Take a minute and think back on your childhood….What was your favorite toy and why? I would love for anyone to share their “toy guardian angel” with the rest of us.

Pam Stewart found this cartoon and thought of me…so true…especially when it comes to planting bulbs….”Now where did I plant those other bulbs last year?”

6 Responses to The Guardian Angels in Our Childhood Toys