Humpty Dumpty Had a Great Fall…How About You? 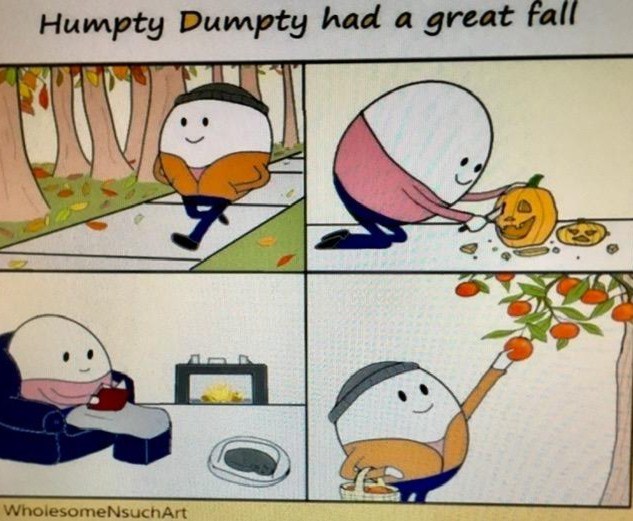 Don’t you love this “take” on the favorite old nursery rhyme about the most famous egg around? I adore different creative perspectives on status quo theories and thoughts…even nursery rhymes. Too cute!

So instead of Humpty Dumpty “cracking” up…we do…in a fun way.

Nancy Greenberg, a young artist, was shocked when this cartoon went “crackingly” viral. Everyone remarked how wholesome and intellectually witty the idea behind the cartoon was.

Greenberg was overwhelmed and realized that many Americans today are so tired of all the cynicism in the country and world that an uplifting cartoon like this just caught fire. At last…a smile for simplicity, creativity, and integrity!

Even Humpty Dumpty was overwhelmed by readers and how they reacted  at his new “Fall experience! ” So he personally thanked one and all.

I remember when I was in training as a teacher…we were always taught to try to ignore bad behavior as much as possible. Most students just want attention when they act up….so if they realize that you are giving your whole attention to the positive students who are listening, polite, and kind it dawns on them that this might work for them too…or if not…their presence is removed to another area and left alone.

For students who seek attention constantly….being given no attention and separated from the classroom activities is the worse punishment for them…they like to be the center of attention…even if negatively.

I think this idea should be implemented with the news….why should we have to suffer through watching bad behavior from any political figure or celebrity…newscasters should just mention what they did and move on…but don’t give the person what they most want…attention. Life is too short to pay for television these days to watch bad behavior repeatedly.

I go out of my way to find channels these days that don’t succumb to the political ads…:) The ads become expensive “dime a dozen” intrusions into our “chill” times in the evenings. How dumb do political machines think we are….we have to see an ad 500 times before we “get it”? I find it quite demeaning…I didn’t get my Masters to be treated in election years like someone…somewhat “daft.”

Okay…off the bandwagon and moving on…Yesterday I got my first question for my memory book….to tell a story about one of my earliest memories. I have been asked this before and I always stick with my most poignant memory involving my father…since it was also my last memory of him.

Daddy had been gone on a business trip and returned…as usual, Ben, David, and I were beside ourselves with happiness because he always brought us a treat back home.

Since I was five when daddy died…most of my recollections about him are just impressions…except…for this one memory. Ben, David, and I each received two lollipops that appeared on each end of one stick! How very cool is that?

The lollipop stick was just long enough for my five-year-old hands to be able to hold it in the middle between one cherry pop and one grape pop…so I ran around my neighborhood showing all my friends my treat…swinging it up and down like a baton!

My daddy had brought us something so special no one else had ever seen anything like it…and I have never forgotten it….an once-in-a life time “pop” from my special “once-in-a lifetime” pop…my daddy! He died mere months after this photo from kidney disease.

Now my question for you….when I googled photos to put in the memory album of  ‘one stick-two-sided lollipops’…there was no such item listed…anywhere. Believe me…I searched and searched!

I remember sharing this memory in Provence when I attended the International Creativity Workshop and at that time sweet “Poppy” (Mr. Dingle) helped me rig two lollipops together using a special binding white tape that blended in with the two sticks…turned out rather well.

Here is my plea….if anybody ever comes across a true one-stick – two sided lollipop on-line or in a candy shop and could send the link to me….I would be forever indebted in gratitude…

Because, think about it…if that little unique piece of a candy’s memory has lasted me a lifetime…I would order some for my grandchildren and tell them the story. Perhaps they will remember it all their lives too.

So until tomorrow….Get outside, enjoy all the festivities fall has to offer, and just have a Great Fall! 🙂

Humpty…I’m having a great fall too…decorating and watching the last of the morning glories blooming at their most beautiful!!! 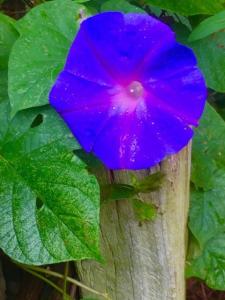 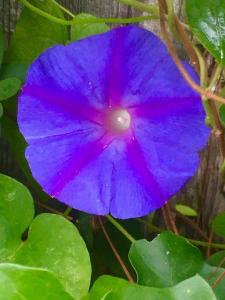 4 Responses to Humpty Dumpty Had a Great Fall…How About You?