What Surprise Will We All See…With our “Last Gasp” 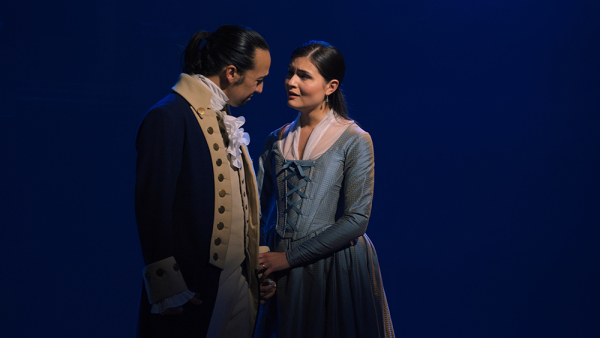 Anne sent me one of Quinn Caldwell’s recent devotionals….she knows how much I enjoy his takes on life with all its surrounding circumstances and complications.

In this devotional he was concentrating on the musical “Hamilton” and the mystery revolving around the last scene as the curtain falls.

Here are his thoughts on this powerful and dramatic ending to one of the most popular theater productions in history.

The one who testifies to these things says, “Surely I am coming soon.” Amen. Come, Lord Jesus! – Revelation 22:20 (NRSV)

At the very end of the musical Hamilton, the newly deceased Eliza Hamilton, having been reunited with her son and husband, faces the audience. Her eyes grow wide, she gasps loudly in delight, and the house goes dark. Curtain.

Much has been made of that gasp, especially in the days since those of us who couldn’t afford to see the show in person watched it streaming online. What did she see, or understand? Was it God? Did she break the fourth wall and see the audience sitting there and realize the work she’d done to preserve her husband’s legacy had come to new fruition? Something else? Lin Manuel Miranda’s not telling, and of course that’s part of the point.

There’s a line in the hymn “I Was There to Hear Your Borning Cry” that regularly makes me weep. At the end, after the hymn has taken us through a human lifetime marked by God’s constant presence, it says,

“As the evening gently closes in
and you shut your weary eyes,
I’ll be there as I have always been,
with just one more surprise.”

I long for it. Not for death, mind you. For the surprise.

Prayer
For the promise of the gasp, O God, thank you. Amen.

The actress who played Eliza, Hamilton’s wife, says that personally the meaning behind the “gasp” changed, for her, at each performance….she never planned ahead what the “gasp” would mean…she just let the individual performance and the audience’s reaction to the play dictate her powerful ending’s feelings…the gasp and the “Mona Lisa” smile seeing her dead husband and son again after so many long years. (And that is all she will say about the meaning of the “gasp.”) 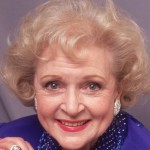 Actress Betty White, the last of the “Golden Girls”…well into her nineties (98) said her mother always repeated the same idea  at a funeral… about death…”Now he/she knows the secret.”

As a young person hearing her mother’s words…she found them comforting (she always loved secrets)…and like the author Caldwell (while not looking for death but yet curious) she, too, is excited about the “gasp/surprise” that accompanies it…

Betty White says, however, that she now knows at least part of the secret.

“If you’ve ever lost a loved one, or witnessed it, you can’t help but see that the body is only an envelope for the letter.”

I love that metaphor.

So until tomorrow….I experienced my own  gasp of delight when I woke up Sunday morning…one moon flower blossom had apparently bloomed during the night or early morning hours….but instead of being withered back inward as I stared out the window by my computer…it was gloriously shining in all its fullness and grandeur as the early morning sun peeked through.

I “gasped” and ran outside to get a photo…the only blossom to survive the night…it stayed in full bloom until almost noon. (I think it is the change in weather…50’s at night and sixties in the morning… that adds to its longevity…it loves the cooler, dryer air. And I love it blooming longer for me to enjoy!) 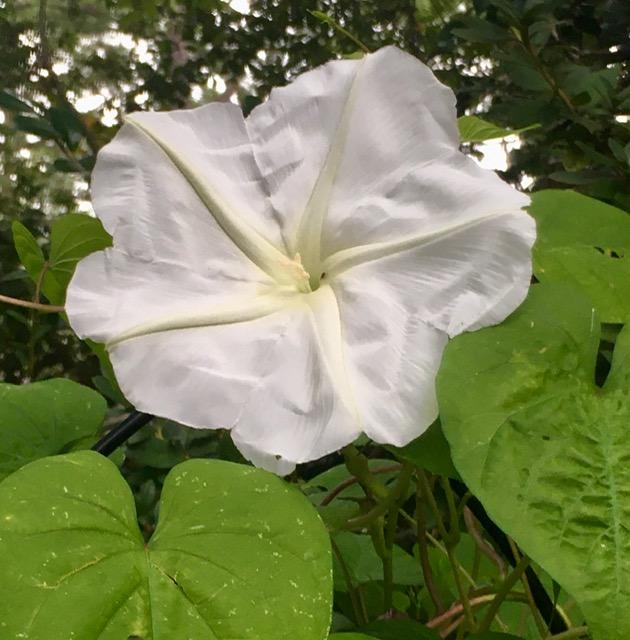 It was too pretty a day to stay inside…so  I walked around the garden where the butterflies were out in full force…they must be enjoying the cooler weather too…they were more exquisite than ever…and they let me get as close as I wanted… to take a picture. Here are three of my favorites taken yesterday 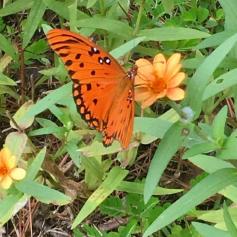 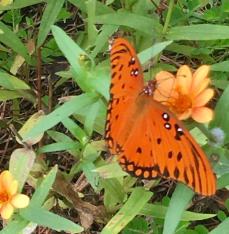 And check out this beauty! 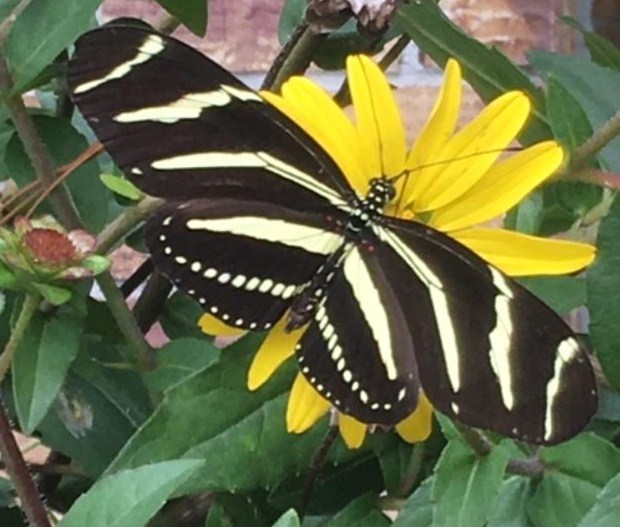 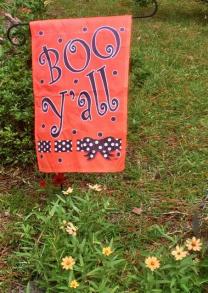