The Divine Spark In All of Us

By now many of you have heard my story, the setting-home, the time... the night before my first surgery, the plot my left breast mastectomy, for breast cancer. *It would be the first of four surgeries in all…to date. For those who recall my memories by heart now…you, also,  know it was when I first heard God’s Voice.

Let me back the story up three days prior….it was May 2008…a few days after Mandy and John’s wedding…I had a red rash around my collar bone and neck that kept getting redder. I had lost a lot of weight…which, initially, I delighted in…’Just in time for the wedding‘ I remember thinking.

But I was also weak, my hair was thinning…something was wrong. Preparations for my only daughter’s and oldest child’s wedding took precedence over everything…but now it was over and I needed to get the rash checked…other family members had noticed the changes in me too and strongly encouraged me to get checked…

From the first stop…my primary doctor visit…things moved at a rapidly increasing crescendo pace…I left the primary doctor to see a breast surgeon who told me immediately it was breast cancer and he was scheduling surgery in two days. The next day was spent doing paperwork at the hospital and receiving transfusions of blood before  surgery the following day…since I was extremely anemic.

*(My particular type of breast cancer was treatable but not curable and my surgeon told me and some of the family following the surgery….probably three years.)

I called my brother Ben to take me to the hospital for the surgery very early the next morning…I only had time to call the children and tell them what was going down…so the night before the surgery I found myself wide awake…lying on the sofa…praying as hard as I have ever prayed.

This repetitive prayer went on for hours, it seemed to me, and then I heard it. “HOLD MY HAND.” I sat up on the sofa…”What?” I called out in a shaky voice…did somebody say something?”

*I thought Ben had awoken and come into the den…so I got up and went to the guest bedroom and peeked in…he was sound asleep.

I returned to the den….puzzling over the voice I had just heard. And then it happened again…”HOLD MY HAND.” “GOD?”I tentatively called out into the darkness. “Is that YOU GOD?”

And then stronger, firmer, clearer than I ever heard a voice… ‘HOLD MY HAND!!!”

I did…and a few hours later while brushing my teeth…I had to un-pry my left hand’s fingers…I had been holding on so hard that my fist was ‘frozen in time.’

To date I can tell you that God has never stopped holding my hand…if ever I have felt distant from Him…it has been me who let go and I have had to find it again and secure my hold once more.

Family and friends  questioned me about what the voice sounded like that long night…now so long ago…  But, initially, I was never able to identify the voice, even gender, or height or depth of the vocal chords until….

….a God Wink appeared in the form of a book. A friend loaned me a popular novel (two years after my surgery- in 2010) called EAT, PRAY, LOVE. For those of you who read it or saw the movie…you remember the famous bathroom scene when author, Elizabeth Gilbert, talks with God for the first time…and then she identifies the voice.

***Her recognition of the voice had me jumping up and down in the delights of an epiphany… when I got to this part of the book…saying ” That’s it….Oh My Gosh...She’s right…exactly right!”

Excerpt: “Hearing the Voice of God on the Bathroom Floor”

In the story…Elizabeth is desperately trying to pray to God but is struggling since she has never tried it before.

And so the prayer narrowed itself down to that simple entreaty—Please tell me what to do—repeated again and again. I don’t know how many times I begged. I only know that I begged like someone who was pleading for her life. And the crying went on forever.

Until—quite abruptly—it stopped. A stillness came over me like no stillness I had ever felt…the most calming stillness in my life.

Then I heard a voice. Please don’t be alarmed—it was not an Old Testament Hollywood Charlton Heston voice, nor was it a voice telling me I must build a baseball field in my backyard. It was merely my own voice, speaking from within my own self.

But this was my voice as I had never heard it before. This was my voice, but perfectly wise, calm and compassionate. This was what my voice would sound like if I’d only ever experienced love and certainty in my life. How can I describe the warmth of affection in that voice, as it gave me the answer that would forever seal my faith in the divine?

The voice said: Go back to bed, Liz.”

“I exhaled and went back to bed…I knew God would now be with me…but nothing would be accomplished that night on a cold tile bathroom floor…it would take time to re-direct my path in life… but God would be with me…every step of the way.”  (Elizabeth Gilbert)

(Back to my story)

Now I knew  the reason why I couldn’t identify God’s voice when people asked me…because it was my voice...yet, like Gilbert, my voice as I have never heard it before or since …confident, strong, loving, and compassionate.

The similarities in our stories were and are not lost on me…. I had finally discovered the answer to the riddle that had frustrated me for two years… since my first talk with God. God’s Voice = My Voice.

Suddenly I understood why scripture tells us we are all made in God’s image...that there is a piece of God in all our souls…each of us has a divine spark...because all of us are a part of God...the part of us we don’t recognize here on earth with our spiritual weaknesses but one day we will understand this mind-boggling truth… we were and are all part of God’s creation and as such…part of the Creator Himself.

So until tomorrow….“I sought to hear the voice of God and climbed the topmost steeple, but God declared: “Go down again – I dwell among the people.”― John Henry Newman

Wednesday the petals on two moon flower blooms were torn by the torrential rains just as they unfurled…I was sad. But yesterday…one moon flower unfurled in torrential winds and hung in there until it could smile in all its beauty.

I just finished the back door Fall Wreath…..letting the glow of the late summer’s sun’s rays of sunshine…fall inside. 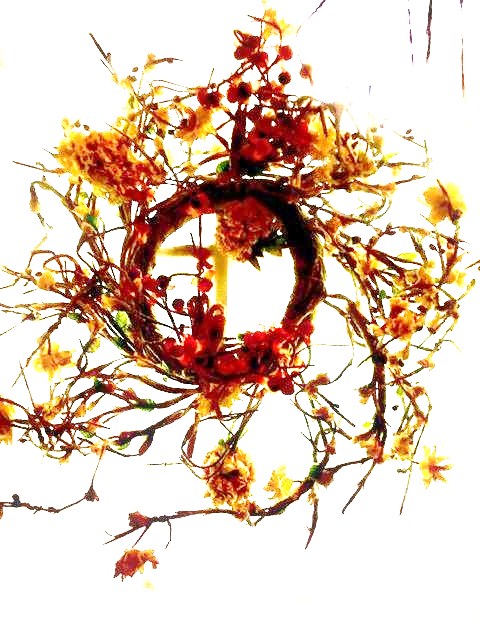 *I want to take a moment and send out an universal prayer for everyone undergoing health challenges, no matter the cause or treatment, and pray that God fills each and everyone with His love beyond comprehension, caring beyond the  most expansive perimeters and comfort within the nestled Hands of our Creator.

Feel renewed with a new lease on life… filled with gratitude and thankfulness! Amen.

9 Responses to The Divine Spark In All of Us