As I am typing the blog today…it is early Monday afternoon (around 1) and the brunt of the tropical storm has yet to hit. We are experiencing a nice, soft, steady rain now…which would satisfy me just fine…if it stayed just like this for the whole duration.

Around 6 this morning I was awakened…by loud thunder booming all around…and rain coming down. But it didn’t last very long and by the time I got up around 8…it was just cloudy and we didn’t get any more rain until after lunch…the soft steady rain I hear while typing.

The storm was supposed to come in earlier but apparently Isaias decided to ‘vacation’ in Florida longer….especially around Jacksonville…still it seemed to be gaining some strength…so I decided to write the blog early in case it came on shore in Charleston as initially predicted and there were power outages.

I found this article on the buffalo and the metaphor of facing life’s storms straight in the eye ahead….In life we all must choose whether we are going to be a buffalo or a cow. 🙂

There is a great lesson about success and leadership from studying the way that buffalo and cows respond to storms.

In Colorado, where I grew up, we are world famous for the Rocky Mountains. What a lot of people don’t realize, however, is that the state is divided almost exactly in half. To the eastern part of the state are the great Kansas plains. Because of that unique topographical landscape, we are one of the few places in the world where there are both buffalo and cows in such close proximity.

When storms come, they almost always brew from the west and roll out toward the east.

What cows do is very natural. Cows sense the storm coming from the west and so they start to try to run toward the east. The only problem with that is that if you know anything about cows you know they aren’t very fast.

So the storm catches up with the cows rather quickly. And without knowing any better the cows continue to try to outrun the storm. But instead of outrunning the storm they actually run right along with the storm. Maximizing the amount of pain and time and frustration they experience from that storm!

Humans do the same thing all of the time. We spend so much of our lives constantly trying to avoid the inevitable challenges that come along with the difficult circumstances that our very own choices have led us to be in.

People who are in debt constantly try to find ways around paying their bills. People who are unhealthy make rationalizations for why they can’t do anything about it or why it doesn’t matter. People who are struggling in their marriage are often trying to avoid the difficult but meaningful conversations that need to be had to reconcile that relationship. Salespeople do everything to try and avoid making a sales call.
Waiting always makes it worse.

What buffalo do on the other hand is very unique for the animal kingdom. Buffalo wait for the storm to cross right over the crest of the peak of the mountaintop and as the storm rolls over the ridge the buffalo turn and charge directly into the storm.

Notice how it’s the exact same storm. It’s such a great metaphor for all of us because we are dealing with the same types of storms.

We all have some relationship issue or health battle or financial struggle.

And we don’t always get to choose whether or not we have storms. The only choice we get to have is how we respond to those storms.

And more specifically here, when we respond to those storms. Don’t procrastinate…walk towards the storm…don’t wait on it to hit.

Eloise got in a half-day of preschool at Primrose Pre-School and Daycare of Mt. Pleasant yesterday. She was so excited…she missed her little friends since March when she left. The school, however, stayed open and have had no cases of the coronavirus through it all.

The parents had to drop their children off by the playground and are not allowed inside…Mollie said they have stayed open trying to allow parents to work and the daycare obviously did their preventive homework… studying the best possible procedures to avoid the virus… since the school is still squeaky healthy after all these months…no Covid cases.

The teachers took a picture of Eloise getting to be the flag-bearer for her first day back. She is still two years old but she has gotten so tall this summer I couldn’t find her in the photo…*I thought she was the little girl in pink…instead there she was front and center with the flag. Slow down Eloise…you are growing so tall. 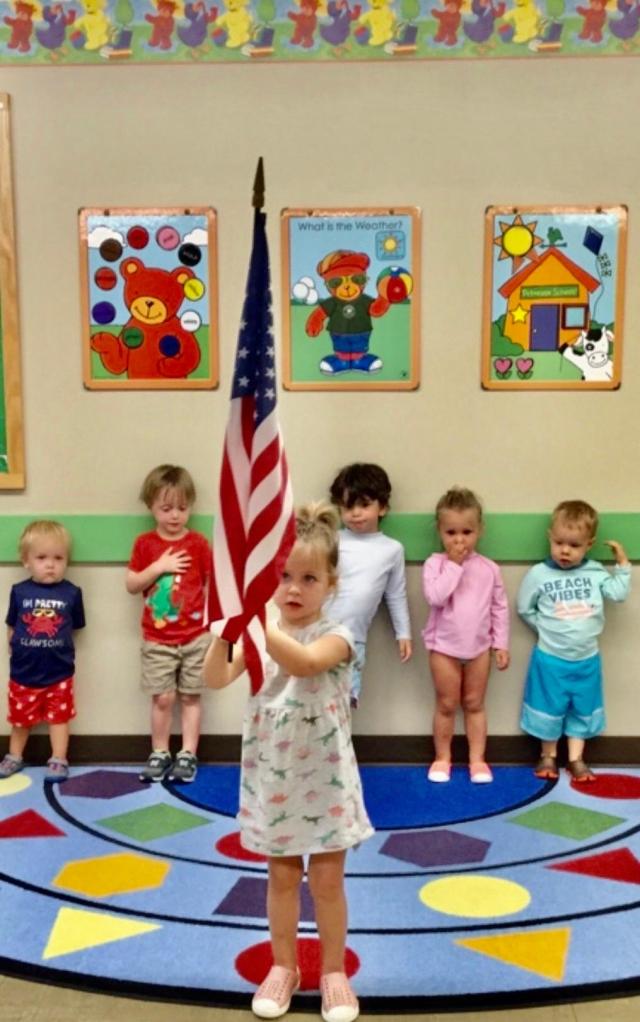 The storm never came on shore in Charleston but skirted us touching land around Georgetown just north of us. So we continued with the steady rain until about supper time and then the most beautiful shafts of light opened up in the skies around 7:30.

I went out and the temps were in the low seventies…cool breezes, fresh smell of rain…I felt like I had died and gone to heaven…haven’t been that comfortable outside in months. The green in the grass and bushes were the most beautiful shade…it made you want to be a child again and just roll in it. 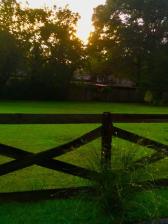 Remember when Jeff cut back my front yard bushes…mostly azaleas (about a month ago) leaving that “ugly” bare stage with brown branches? …look now! 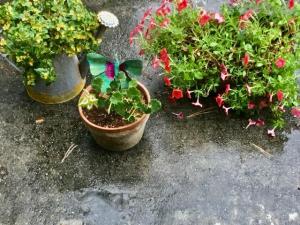 Good night everyone….God did send us the ‘perfect storm.” Thank you.

2 Responses to Facing the Storm