“Everything is Good With My Heart”

I re-ordered a book, recently, that I read several years ago because I was purposefully looking for an imprinted passage (from my memory) that I, personally, wanted to write down and save for a special occasion one day.

The problem was…I just couldn’t remember the title of the book…I could remember sections of the story and some characters… but not the title itself. Anne to the rescue…I remember giving it her to read and to pass forward to another when she finished. It was “Sherlock Anne” who tracked down  the title. The Art of Arranging Flowers.

Both stars and flowers (my two favorite “gifts” from our galaxy) play a major role in this beautiful book about life and how it is meant to be lived.

I want to share a section of the story with you since it explains the title of our post today.

In one fictional “scene” Captain Dan Miller (an astronaut who walked on the moon) invites a local florist, Ruby Jewell, to a formal dinner at the White House…along with other NASA astronauts. Captain Miller flies them to Washington in his private Cessna and it is during the flight back that Ruby understands why she was supposed to be in this plane… from the conversation that follows:

Captain Miller (Dan) tells Ruby that he has beat cancer back twice but it has returned a third time and the doctor has informed him it is the “last” time. Dan says he didn’t find the information unsettling…in fact he surprised himself with the fact that he felt almost comforted by the news.

He then shares an epiphany he had on his second mission home from the moon that changed how he saw the world and his place in it.

Looking out the window (on the space craft that rotated every few hours) Dan kept seeing the same view …the sun, the moon, and the Earth all lined up like “three balls in a row.” There was a perfect order and symmetry to them.

Then as he stared at the stars…he continued ” I felt as if I was seeing something of myself, ancient star dust,  something that belonged to me once…yet something that I hadn’t seen before. I felt somehow connected to these masses of light, as if everything I was made of could be found in them as well… that everything lines up, like the sun, moon, and Earth…everything is ordered and intersects at just the right time. We are all uniquely a  part of this great universe.”

The captain said he just shared this experience with Ruby because somehow he, intuitively, felt she would understand when, earlier, his family and friends didn’t…the idea of an order to the universe that is spectacular.

“When I arrange flowers I know which stems belong together. A certain energy guides me depending on the person who ordered them and the circumstances for the order. It is important that the right arrangement of flowers tell the receiver the right words of encouragement, congratulations, love, or sympathy.

“When I open the refrigerator the flowers tend to lean in to let me know which ones are best suited for this specific job..which flowers need to be taken and exactly how they should be arranged.”

” So… I understand”…Ruby concluded. “There is a certain special order in our passions in life, isn’t there?

With one last Captain Miller anecdote…the flight ended…but Ruby knew she would never forget that story or its meaning.

“There used to be this janitor at the NASA headquarters,” Dan said. His name was Josiah but everybody just called him Jo. Jo appeared ancient to all of us when we first met him, but he worked another twenty years and never missed a day.”

“I’d see him every morning. He’s stand and salute all the astronauts when we came in the building and he always said the same thing when we asked about him…”Everything’s good with my heart.”

Being young and brash we’d just hurry past him, slap the old man on the back without much thought…but you know, I always knew that what he said was important and I always thought that was the thing I wanted to be able to say one day too.” 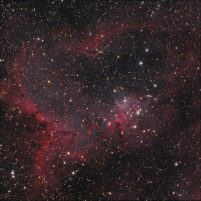 *The Nasa photo used in today’s title picture is that of The Heart  Nebulae. This heart-shaped formation of stars are part of the Milky Way and farther off is the smaller soul nebulae...together they are called the Heart and Soul Nebulae. (photo on left)

So until tomorrow…At some point in our lives…an important intersection…don’t we all want to be able to say daily…  “Everything is good with my heart” and “All is well with my soul.”

Everything is ‘good with a grandmother’s heart’ when Walsh sent this photo of Rutledge when he was an one-year-old at the Outer Banks… digging in the sand… and now six years later…as Rutledge is about to turn seven on the 18th. ***That boy likes to dig…engineer or archaeologist…only time will tell?

It was duck-like weather in Duck too yesterday…on and off rains…but by late in the afternoon the family was able to head over to the beach. 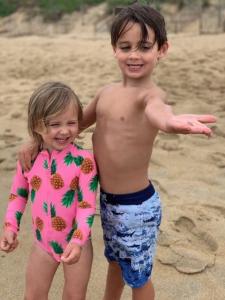 Rutledge is staring at a dolphin swimming along the coast-line probably looking for what he’s going to have for supper!

I hope Duck had as beautiful a sunset (after a soaking wet Friday…apparently like ours)…it was breathtaking here in Summerville last evening.

2 Responses to “Everything is Good With My Heart”