How It All Came to Be…Blog Happy!

As the tenth anniversary of the creation of my blog (Chapelofhopestories.com) grows closer …August 7 , 2010 (to be exact) memories are starting to crack open the flood gate of yesterdays. 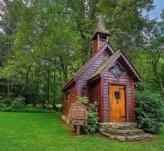 It is hard to believe that it was a decade ago this July that I first laid eyes on St. Jude’s Chapel of Hope in Trust, North Carolina. Mike Burrell was the “explorer” who first discovered it. Mike would entertain some of his friends from Summerville annually (who rode motorcycles) at his and Honey’s new home (then)  in the Pinnacle Mountains of North Carolina.

In preparation for his friends’ arrival…Mike got a motorcycle guide book (that showed all the best attractions in the area) that might add fun to the “bike” trip that year. One of the pictures and articles was on a little chapel in Trust, North Carolina called St. Jude’s Chapel of Hope. Mike was instantly interested and the timing just seemed to work out perfectly…allowing the group to stop at the little chapel and visit.

That night everyone was talking about it at dinner so Honey got interested and returned with Mike some time later. On the way home, they both thought of me and how they just knew it would have special meaning in my life (I was two years into my cancer treatments by then)… especially because of all the potential for stories from the left-over relics found on the altar and the creation of the chapel by an once-cancer survivor herself…Beverly Barutio.

After much pleading by Mike and Honey to leave the lowcountry and head to the mountains…(Eva Cate was only three months old and I was fixated on my first grandchild)…I agreed. I remember pulling up in Mike and Honey’s yard…only for Honey to tell me to hit the restroom if needed …we would leave the luggage for later…just hop in her car…we were off to Trust, North Carolina.

On the way there Honey caught me up with the history of the chapel so that by the time we arrived (later in the afternoon on that warm July day) I was already filled with excited anticipation. I was not disappointed. As I walked into the doll-like chapel…I sensed that this was a sacred place and I was supposed to be there…right at that moment.

I wandered around the chapel reading the newspaper articles on Bill and Beverly Barutio and the amazing story of the creation of the chapel…it was then I felt a presence and intuitively knew it was Beverly Barutio welcoming me “home.”

On the return trip, a rainbow magically appeared over one of the mountains.Honey pointed it out and we both knew that something spiritual (beyond our understanding) had just taken place.

A few days later (August had now arrived) I found myself at Mandy’s holding Eva Cate and excitedly telling her about  the special little chapel in the woods and what it meant to me. About that time the phone rang…it was Georgia Dupree wondering if I was home in Summerville…she had something for Eva Cate she wanted to get to me…I told her I was in West Ashley at Mandy’s and followed up by telling her about the trip to St. Jude’s Chapel of Hope.

Georgia first uttered the word “blog”…the perfect venue she suggested for sharing stories of the travelers who stopped by there and left artifacts on the altar.. When I hung up I looked at Mandy…and (embarrassed) asked “What is a blog?”

She quickly explained the concept to me and said John would be happy to help me get set up and started. In less than a week…August 7, 2010 the first blog was published.

It was only after writing two or three posts about the discovery of this chapel that I began to wonder…how often am I supposed to do this…and what am I going to write about now?

The next God Wink appeared…I bumped into Ava Giet, one of my favorite substitutes at Alston Middle, in CVS pharmacy, and we started talking about the blog.

When I admitted I didn’t know what else to say…Ava just laughed…“You (Becky Dingle)…don’t have anything to say? The teacher with a 1000 stories? Just start writing…and you will never not have a story!” (Best Advice I ever got!)

That night the idea hit me…why not challenge the famous fictitious Scheherazade- (the storyteller of 1001 stories in Arabian Nights) to a storytelling contest? Since my cancer prognosis was fairly bleak…this would keep me working towards a tangible goal and help keep my mind off the treatments..so I was off and writing.

***I knew time was passing from Eva Cate’s progress in crawling, walking, and talking.

1002 days later as I posted the story…I had beaten the most famous storyteller from ages past…a celebration was held in Summerville at my home…I was still alive :)…so the blog continued… 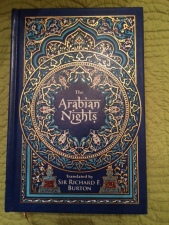 Today I have written …over three times the number of stories in 1001 Arabian Nights. (Thanks for the book, Jo!)

And what I discovered along the way is that everyday life really is an on-going prayer…a service of worship where I learn something new daily to help me better understand my role in this amazing gift God gave me…life!

God also, with a lot of help from friends, gave me a garden…a sanctuary He knew I would need in the days ahead. I still do…it is my refuge and haven from the world’s problems.

I didn’t just have to write about St. Jude’s Chapel in order to find God …I just had to show gratitude in each blog for the opportunity to share and exchange insights about life that will enable and help everyone find their own ‘little chapel in the woods’ …it just takes “trust” and a little “luck.” 🙂

So until tomorrow…When things fall apart…don’t worry…better things will fall in place. You just have to trust in God.

Yesterday I got an early text from Anne asking if it suited to come walk through my garden and bring lunch for both of us. We have not had a spontaneous get-together in “forever” long…I was delighted! What fun to catch up and appreciate this time to slow down and share life.

Harriett…Look at your gorgeous day lilies blooming now…just in time for Anne to share in their beauty!

*Anne putting up the potting shed wooden plaque she made for me several years ago…and enjoying lunch yesterday! Thanks Anne…what a treat…had so missed having lunch and catching up!

My new screen saver…it prompted the idea for the blog story today. 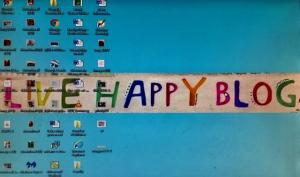 2 Responses to How It All Came to Be…Blog Happy!