I think the best thing I love about reading is discovering insights into different things in life that I never considered or gave much thought to as my life has clipped along. The Giver of Stars is an historical fiction set in the Kentucky mountains during the Great Depression. Every few pages I find myself jotting down a thought I want to come back to and reflect on.

The story is based around a true event…a literacy program Eleanor Roosevelt created as part of the New Deal. It was a rather early, crude book-mobile idea or as Eleanor called it “ a traveling library“…with the transportation to isolated cabins (dotted throughout the mountains) accomplished with horses and mules carrying female riders.

Initially some men or heads of the household were against the idea of books being dropped off and a week later picked up…for different reasons. Many residents were illiterate and some men didn’t want their wives taking time off from their chores to learn to read or read for pleasure. (especially if they didn’t know how to read) 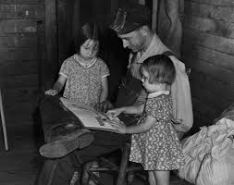 But other families understood the importance of literacy for their children to free them from the poverty they lived in. 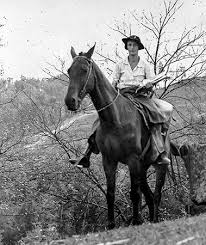 This caused tension and some scary situations for the young women delivering the books. The team leader explained that the most important reading for them had nothing to do with books…but people. The young women were going to have to learn to ‘read’ people and situations in order to avoid conflict or danger to themselves or others in households.

As an example to the other young riders…the team leader Margery, explains how animals have this innate ability to read other animals…it is an important key to their survival. The most successful people in life  learn how to read people the same way. She gives this example”

“Because they’re reading each other… and that old gazelle sees that the lion is all relaxed, and that he just wants to take a drink. And the hippo is all easy, and so they all live and let live.”

“But…you put them on a plain at dusk and that same old lion is prowling around with a glint in his eye-well, those gazelles know to git, and git fast.”

The traveling book women had to learn when the safe times to stop by a cabin was and introduce themselves and the literacy program … and when not to go near…especially when there was the smell of moonshine all around the trails or cabins in the mountains.

As much as I (as a teacher) am a huge proponent of literacy…needed more so now than ever before in all walks of life to earn a living…still it is true that the most successful people are the ones who intuitively know how to “read” other people.

God knows how to read us perfectly…there is nothing that He doesn’t know about us. Like Adam and Eve (cast from the Garden of Eden) there is no hiding place from God. The difficulty lies within us trying to ‘read’ or figure out God and His actions some times. Of course that is when faith comes into play.

So until tomorrow….I decided with Mother’s Day arriving quite quickly …I would end with a funny anecdote from one of my favorite authors Archibald Rutledge of Hampton Plantation…once Poet Laureate of South Carolina. Some of you have seen it on the blog a few years back and read it before…but it is definitely worth a re-read and a chuckle. A gift for mom.

***As we can tell from the following Hampton Plantation legend… even before that apple/snake problem in the garden…things weren’t going that well between Adam and Eve…so God stepped into help and a whole new crop of problems were ‘created.’ Have yourself a good deep chuckle…

“The Legend of the Walk Off People”

It appears that on one occasion Adam, deeply troubled, sought out God in the Garden of Eden.

“God,” he said, “you know how I love to catch fish in the river and to hunt rabbits. But Eve, she’s always complaining. She says that she gets lonesome because I fish and hunt so much. She’s talking of leaving me.”

“That’s easy,” said God, “come down to the creek with me, and we will make a few more people. They will keep Eve company while you are away from her hunting and fishing.”

Arriving at the water’s edge, God shaped some new people out of mud, and then leaned them against a rail fence to dry.

“Adam,” he said, “I will come back before sundown and put some brains in them.”

But God, forgetting that He had some other prior engagements that afternoon, did not return to finish His work until the next morning.

And it was then… to His surprise and dismay, that He discovered the people with no brains had walked off! And (do you know) they have been increasing and multiplying ever since!

I decided to give myself a gift for Mother’s Day…for  nature.. birds that is.. I ordered a bird bath and it came in yesterday…two weeks ahead of time and I put it together myself…a first.

I love watching flowers right after a rain or a sprinkler…life sparkles. Have a sparkling good day today! 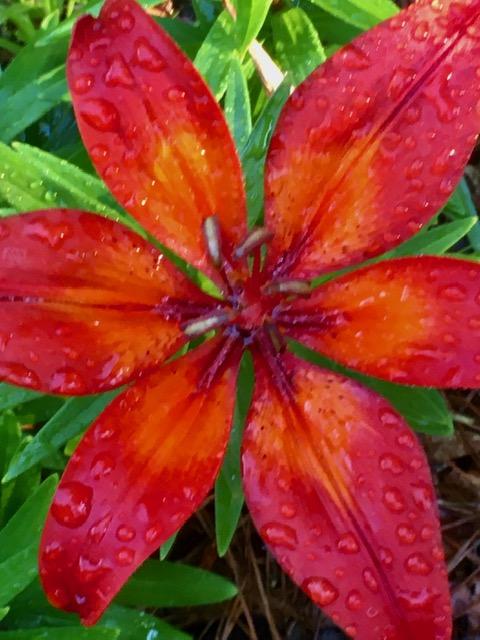 4 Responses to The Art of Reading People…not just Books