The Lesson of the Magnolia

During these quarantined, isolated times we are all figuring out what we can’t do or where we shouldn’t go….but it is also leaving us plenty of time to do things we have put off… seemingly forever.

One of these chores for me was finally scrubbing my mailbox yesterday. Christmas was probably the last time I cleaned it when I added some Christmas decor to the top…but since then…and especially since pollen season I have watched the mold and pollen grow with inattention…my focus on what was in the mailbox itself.

Yesterday I had had it…I grabbed some cleaning formula and an old rag and out I went. I love my mailbox because Mandy, my daughter, painted it for me as a Christmas gift several years ago. A mailbox with a beautiful magnolia on it. It looked so good after the cleaning…(Before-left- After-right) 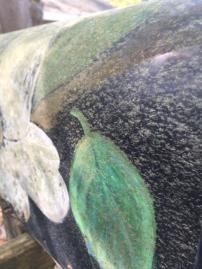 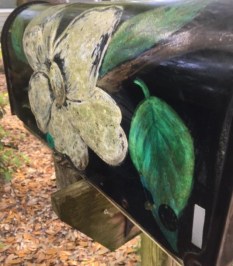 When I came back in the house after finishing up…I started flipping channels…and landed  on HGTV…one of my favorite channels. They had some old Chip and Joanne Gaines’ “Fixer Uppers” on…(*I really think I know just about every single line and joke from Chip from every single episode.)

Like so many others I was saddened when the show went off…always enjoyed watching Jo’s whimsical decor ideas that match my personality and decorating style too.

It was in the last episode that Chip told the kids why all the business trademarks, including their farm home, had Magnolia on it. (*A Magnolia Empire)

It was fitting that the series concluded with a planting of one last magnolia tree. As Chip’s kids helped their dad plant the tree next to a refurbished porch, Chip Gaines finally revealed the origin of the symbol.

”You know what’s interesting about a magnolia tree?” he explained, ”One of mama and I’s first dates, I climbed up a magnolia tree, and I pulled her off a magnolia bloom and I gave it to her.”

Isn’t it amazing how human beings can take something in nature and turn it into a symbol that reflects their life style?

Joanne added her own explanation:

“Now that we’ve had some time to reflect on it, it’s as if our whole lives had been preparing us for this experience. We didn’t know it at the time, but it’s as if the seeds had been planted long ago. Have you ever looked at the bud of a magnolia flower?

It’s a tight little pod that stays closed up for a long time on the end of its branch until one day, out of nowhere, it finally bursts open into this gigantic, gorgeous, fragrant flower that’s ten times bigger than the bud itself. It’s impossible to imagine that such a big beautiful thing could pop out of that tiny little bud. But it does. And that’s sort of what getting ”discovered” and sharing our lives on Fixer Upper feels like to us.”

Don’t we sometimes intuitively sense that everything, good and bad, that has happened to us is preparing us for when our bloom opens wide to the world to reveal our true selves?

While most of us will never be celebrity famous… we are all created to burst open in our own unique ways. What God has done in the DNA of each magnolia bud, He now desires to do in all our hearts…a closed up tight little pod bursting forth into a gigantic, gorgeous, fragrant image…as a special child of God. 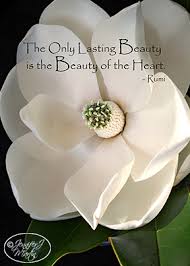 Yesterday was another hot summery day…the joke about living in the South is that “Summer starts in April” but the joke is on them this year as yesterday hit 90 in areas of the lowcountry … Summer has started in March!

I had two wonderful friends who dropped off goodies for me on the porch.

Mike Lesko  brought me Cheetos yesterday morning after his marvelously witty wife, Dee, texted me and we discovered we were both Cheeto addicts like the Mexican man in the story earlier this week and his little chihuahua .

Dee was wanting to know the name of the little dog (which sadly the article never gave…the chihuahua should have had his own by-line) because she wanted to hire the dog to get her Cheetos too. Instead, Mike, her husband went to the store yesterday morning and got us both Cheetos…what a man! (*Most certainly… Mike is not in the dog house! 🙂

Anne came over, bringing me some of her reproduced note cards, homemade rye bread, and then took photos of  cloned “Little Big Red”…I have commissioned her to paint ( water color) the geranium  as it is now…covered in blooms…a testimony to the courage of starting over during a pandemic. (Anne also discovered 5 bird eggs in my red English petunia box on the green chair.) 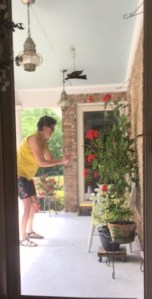 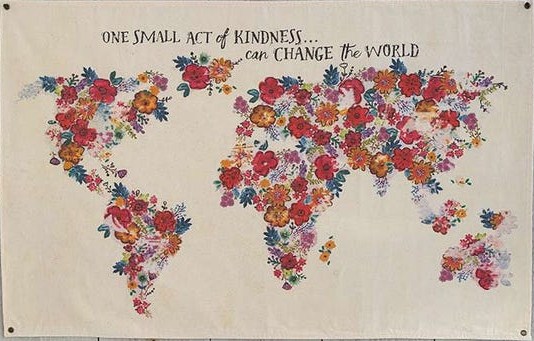 *Lynn Gamache (British Columbia loyal reader) is decorating for her extended family this Easter… even though they won’t physically be able to gather… but she wants to show her grandchildren her hidden peeps hiding inside and out. 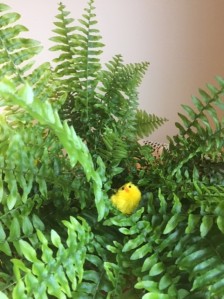 No matter what happens…remember…life always finds a way to return…the same as hope.  Have a great day!

2 Responses to The Lesson of the Magnolia