What To Take into a New Frontier…

All of us are becoming aware (slowly or suddenly) of a very real situation that is coming faster than we imagined…the ‘frontier’ of the Caronavirus….in other words…the “unknown” and “uncertainty” of the potential and the reality of this quickly spreading virus and its effects on life as we have grown accustomed to it on a daily basis.

In our family it hit a little closer to home a couple of days ago while Mollie was getting packed to attend a five-day conference in San Francisco. We had talked and I was helping out with the children for a couple of the days while Walsh had to work. All was set on “Go” until it wasn’t.

Yesterday the phone rang and it was Mollie…plans had changed. The National Beauty Counter Conference was being cancelled due to the Caronavirus. The location was too close to the latest outbreaks and there were just too many unknowns to risk anyone’s health.

Instead the leaders decided on a shortened (3 day) conference that could be seen via “live streaming” in locations close to regional sales sites for the thousands of women working for the company. In the Southeast it is Asheville. So Mollie and I talked- rearranged some sitting times and she could start making plans for her teams.

You, too, might be having to change travel sites or do more work from home with your particular company or enterprise. As we watch other countries changing their daily cultural habits…like closing schools, large public buildings, medical facilities and other accommodations that have always been considered “norms”… we realize that our attitudes towards these changes will go a long way in how our families react to daily disruptions.

The attributes that have always worked for us during “normal” times…showing kindness, patience, generosity, and love towards our fellow man is going to be even more important in the weeks and months to come if this virus continues spreading. 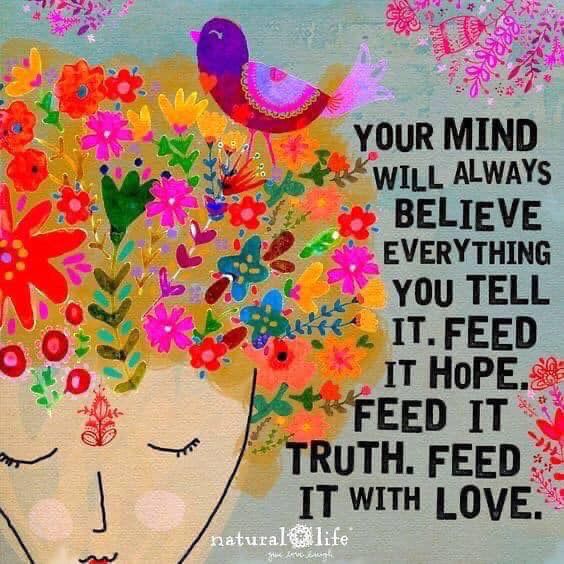 The message above is so important…in uncertain times…the ‘control freak’ in each of us wants to try to keep things as normal as possible for as long as possible…but at some point it is a good chance that we will have to re-train our own way of thinking. Like the poster says:

“Your mind will always believe everything you tell it…so tell it positive things….Feed it hope. Feed it truth. Feed it with love!”

And who knows…we might all come out of this ‘unknown frontier’ stronger, braver, kinder, more patient, and more loving. One day when we look back on it…this part of our story…the struggle will be our most remembered part.

Mother told me one day about her personal experience with a “pandemic”…the Spanish flu of 1918. This “struggle” became part of her story.

Mother was born December 22, 1919…right in the midst of the Spanish flu that spread quickly around the world.

The 1918 influenza pandemic was the most severe pandemic in recent history. It was caused by an H1N1 virus with genes of avian origin. Although there is not universal consensus regarding where the virus originated, it spread worldwide during 1918-1919.  In the United States, it was first identified in military personnel in spring 1918.

It is estimated that about 500 million people or one-third of the world’s population became infected with this virus. The number of deaths was estimated to be at least 50 million worldwide with about 675,000 occurring in the United States. Mortality was high in people younger than 5 years old, 20-40 years old, and 65 years and older. The high mortality in healthy people, including those in the 20-40 year age group, was a unique feature of this pandemic.

There was no vaccine or antibiotics for this flu and mother, of course, as a small infant, was most prone to its deadly effects. She told me in the spring of the year when she was just five months old… the doctor thought she had contracted it but it turned out just to be a serious cold and congestion. Mother always was “pioneer stock.”

She also told me that she thought she had three more sisters than just her sister, Eva, and her older twin brothers. One of granddaddy’s sisters died from the flu and her husband was fighting in World War I…so they took in the three little girls for about two and a half to three years before Granddaddy’s brother-in-law returned home and found a job and home for them.

Mother remembers crying when her “three sisters left” with their suitcases to go with some man (their daddy) who they didn’t even remember. They were crying too…mother said it was one of her earliest childhood memories… losing three of her sisters.

Later as adults, the ‘three sisters” all returned together to share those early memories of the love and compassion mom’s family had shown them…memories they never forgot.

So until tomorrow….“Many times, the thought of fear itself is greater than what it is we fear.”

Walsh saw where Clemson was holding a special father-son football experience today with Coach Dabo and the other assistant coaches. He checked his schedule and  saw that he was actually off work this weekend…the signs were there. Go for it!

So he and Mollie packed the boys’ belongings and Walsh picked them up early from school Friday (they didn’t know a thing about it…a real surprise) to head up to Clemson.

I texted last evening and asked Walsh if they had gotten there (a little after 7:00)…and he said they had just pulled in… to one of Clemson’s oldest “historical sites” in the little college town…the old ESSO station.

I hope the boys got some sleep last night because I know dad was exhausted..At 8:30 a.m. they get to meet the coaches and some of the players, watch part of one of the spring football scrimmages and then watch the Clemson-Florida State basketball game before heading back this evening…a long but fulfilling day! What wonderful memories for all!

8:38 a.m. Saturday morning…just got these first photos from Clemson Stadium! 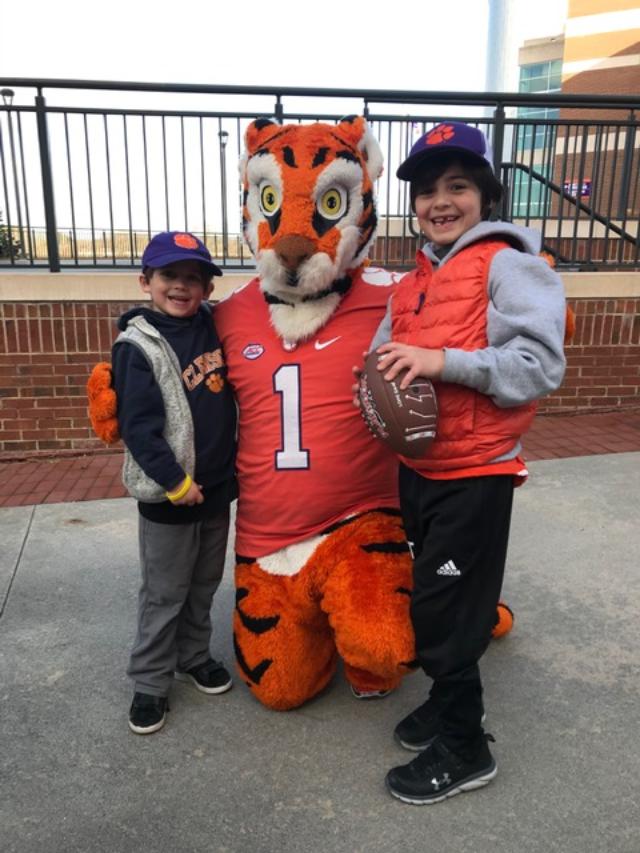 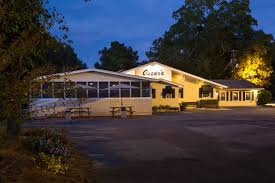 Tommy and Kaitlyn came  to Summerville after work yesterday afternoon to visit Lassie and get some financial expertise from her as they start transitioning into a new partnership at work.

We ended up at Oscars for dinner…but it was almost 8:30 before we got seated even with a reservation…we were  starving but the food was worth waiting for- delicious and we had a great time  catching up. *The chocolate Bundt cake dessert with whipped cream and coffee ice cream was out of this world!!

*Obviously I was getting tired too since I forgot to take a picture of Tommy and Kaitlyn but rest assured…we had great company and fantastic food!! Terrific way to end Friday!