Want to Forget Your Troubles for a Day…Enter the world of a Two-Year-Old! 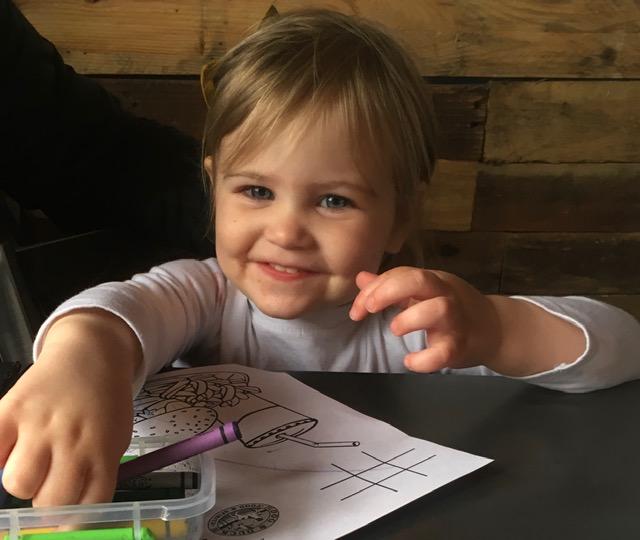 Entering the world of a two-year-old and seeing the world through their eyes is provocative, hilarious, and just pure fun! I managed to maneuver through the heavy morning traffic and get to Walsh and Mollie’s in time to see Lachlan before he left for pre-school and watch Mollie get off for her doctor appointment.

Normally as soon as Eloise senses Mollie is leaving… all kinds of melt-down variations transpire… but this time it was kinda funny…Eloise made two little strange, pitiful sounds and then stopped…like her heart just wasn’t in the drama queen role..and it was way too much effort for a melt-down so early in the morning. Instead we just started playing and never stopped until Mollie got home…except for some snacks.

Two-year-olds get a bad rap for the “Terrible Two’s” and their “tantrums” but since Eloise is my fifth grandchild I think I can safely say with some experience…that it is not the “two’s” you have to dread…but the threes. (All my grandchildren held out another year before letting loose with the tantrums.)

Look carefully at the title page…and spot the twinkle in Eloise’s eyes…two-year-olds always look like they have the most delightful secret…a wondrous secret…but they aren’t sharing it with anyone.

My other observation, made while playing with Eloise yesterday, is that two-year-olds think they magically disappear (whole body disappearance)… 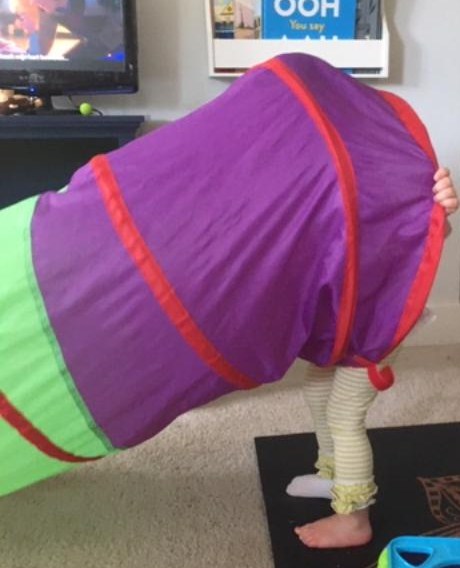 Don’t we all wish this were true…especially later in life? I can think back on some of the most embarrassing moments of my life as a youth and adult … wishing a gigantic hole (like a sink hole) would just swallow me up…or I could just close my eyes…and all the stares in the room would disappear with my own disappearance. 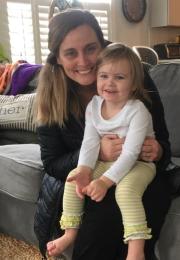 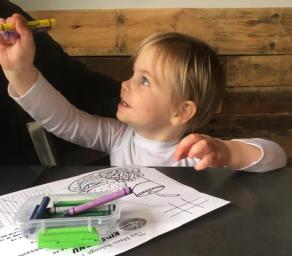 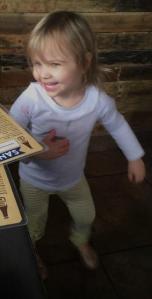 Mollie took us gals out for lunch yesterday when she got back and Eloise decided to eat the green crayon (what is it about children having to taste crayons?)..leaving her once-white t-shirt…tie-dyed. She had no problems with it…in fact she just wanted Mollie to sing a tune with her name in it…so she could do a little jig by our booth in the corner. Another wonderful trait of two-years…dancing for everyone to see is not a problem…just an expression of  amazing life in action.

So until tomorrow…I wish I could say my cough/congestion/cold crud disappeared amid all the fun and frivolity! Hack Hack…it didn’t but I sure had a good time and for several hours just enjoyed life…and hey, that’s not bad either!

Last nine weeks Eva Cate made the A/B report card honor roll and I was beyond excited…as many of you know Eva Cate had to go back before she could go forward and was still struggling some and terrified of the third grade and here she had made the A/B Honor Roll the first term.

But she told me that she wanted to make the All A honor roll this nine weeks…I congratulated her on her grit and determination but reassured her that the A/B was really excellent too…And Lo and Behold she made the Straight A Honor Roll this term. 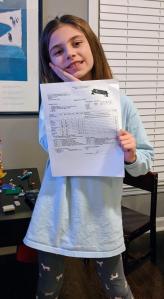 *When I asked Mandy who or what was turning the light of learning on to Eva Cate I was told it was her teacher…whom Eva Cate adores and she wanted to make the straight A’s for her…once again the power of a teacher…such an amazing calling and it is a calling. 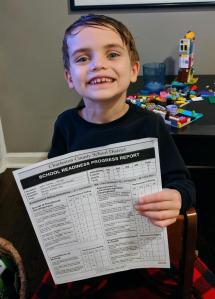 Jake wanted to hold up his report card too and I was assured he was a very good little boy in his four year old compulsory class…I told Jakie of that I had no doubt! So proud of him too! Too cute!!

*Is it just me or are these report cards huge? I would sure hate to be the kid with the ‘not so great’ report card…it is like you are carrying a poster around with you advertising your lack luster results. 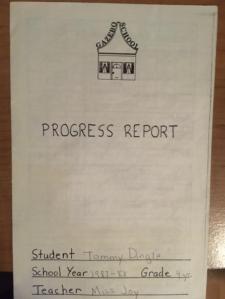 I found Tommy’s pre-school progress report and it was about a third the size of these report cards today the grandchildren brought home. One thing I can say is that you can’t hide them from your parents by stuffing’em in your backpack…they’re too big.

Mollie told me Berkeley’s report cards are 4,3,2,1 instead of letters…the times…they are a changing...I think one must need a map to decipher the report card findings. 🙂 Every district seems to do its own thing.

2 Responses to Want to Forget Your Troubles for a Day…Enter the world of a Two-Year-Old!