A Life of Significance 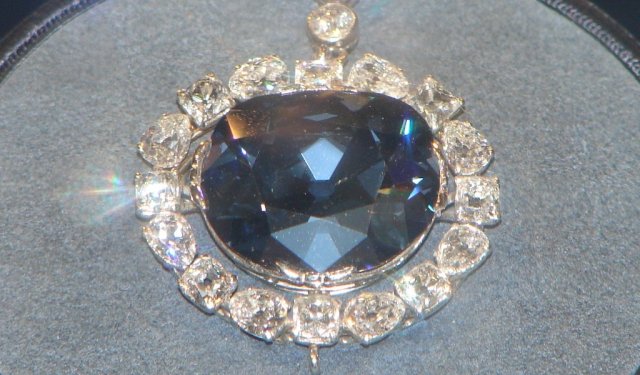 The Hope Diamond, the most expensive piece of jewelry in the world (45.52 carats) is today priced at 250 million dollars. It has a long turbulent history of having a curse upon it, mystical powers, and the magical ability to turn red when placed in certain light.

It has come down through Indian and French royalty to an American millionaire heiress whose life was riddled with strange tragedies before being sold to another millionaire who took it on tour before handing it over to the Smithsonian Museum of Natural History in 1958…where it still remains today.

Obviously for tourists who stand in long lines to see this world famous gem… it is an ‘once in a lifetime’ spectacle…but somehow I imagine if one worked in the museum day in and out for years in that department…that over time, even, the Hope Diamond would lose its strong appeal and become almost mundane…it is just the way we humans are built…we lose interest in material things, no matter how badly we thought we once wanted and needed it..material prizes soon become obsolete in our desires.

In an anthropology class I took while getting my Masters the professor explained this strange human quirk of losing interest in material possessions over time as a throw-back to our first human ancestors. In order to survive…they had to keep changing and adapting to the environment around them…fixation of a possession would have distracted them and put their lives in peril and doomed their would-be families to extinction.

Today while watching many children excitedly open presents and gifts from Santa they so desperately wanted …among squeals of joy and delight…  adults can visually witness how this excitement fades rapidly throughout the day…with them becoming lethargic before the day is over…and most children going back to older bikes, toys, and other possessions. The thrill is over. They need the next “fix” new toy to bring them that moment of happiness again…with the same short-lived results.

Somehow society has brainwashed us into thinking success is defined by the amount of possessions we own and the amount of money in our pockets.

The problem is….in how we define success. It is never success, as defined by possessions and riches, that will fulfill us…it is leading and leaving behind a significant life. Significant in the sense of an unique, individual special meaning…while simultaneously leaving behind positive influences on the ones who follow.

Possessions steal our precious attention, time, and energy and we don’t even notice it… until it’s too late. It is the people who were significant in their influence over our lives that we remember in loving memory. Now we must carry that torch and leave significant memories to our loved ones behind on how to live a fulfilling life.

Our hearts desire significance because it lasts forever…possessions, no matter how great, are only temporal.

So until tomorrow…The journey to significance begins with one small step…it can be as inexpensive as a cup of coffee or just one heartfelt conversation…it is the giving of one’s most prized possession…ourselves to another.

All of us Louise Penny (Armand Gamache detective novels) fans are too excited…the latest novel has just been released!

When one sees photos of Louise Penny they usually show a genteel looking gracious woman with beautiful, serene features…but below we see her just plain having fun before one of her first book signings on her latest novel in the series…titled “A Better Man.”

As she flopped on top of the books, exhausted from the sheer numbers, her assistant laughed and said …”Are you lying on a “better man“? Too cute and funny!

Luke’s mom, Barbara sent me mountain apples and I took some to John and Mandy. Jake wanted to eat one Thursday while I was keeping him. I told him where they had come from- Hendersonville, the mountains.. and Jake declared that “mountain apples were the bestest in the world!” (I agree! ) Thanks Barbara!

Anne plays in two bands *The Old Tickers  and the Entertainers) … they both entertain veterans at the Veterans Victory Home in Walterboro. The Gary Sinese Foundation helps provide financial support for this veterans’ home. Since the bands entertain just to bring enjoyment to the veterans they now all have volunteer Gary Sinese t-shirts for their philanthropy.

2 Responses to A Life of Significance