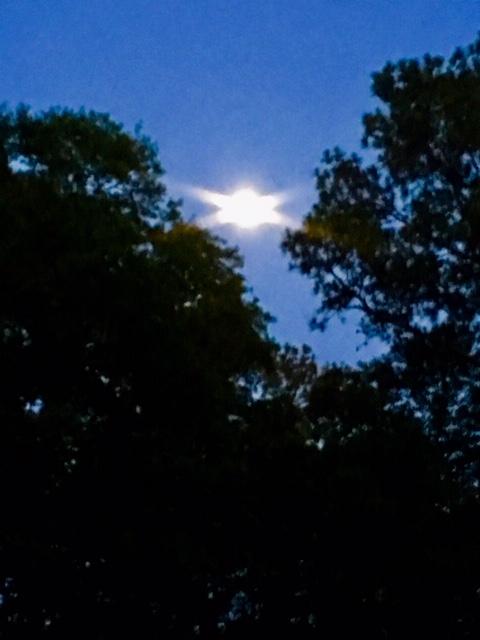 My garden, originally started out as a moon garden…one of the reasons that I planted moon flowers around the entrance gate and on my front porch for the first two or three seasons.

After some trial and error I realized that there just weren’t enough luminating plants and flowers to do the garden justice at night and most of them couldn’t tolerate the high temps and droughts in the daily life  of a lowcountry summer. Most of the first season’s lumination plants perished under the merciless summer sun.

Still…I love my garden the best in the early mornings and late evenings. I have added some extra solar lights to the garden to make it show up more at night…while keeping the day time filled with as many heat and drought tolerant plants as I can find.

Thursday night as I was adding the solar lanterns around the garden I turned and saw the most beautiful moon. I took a picture of it and then came in the house…only to discover  what looked like bright moon rays  protruding laterally from each side of the moon….four rays in all.

I thought to myself if I had leaned sideways east or west it looked like a cross in the moon. However when I looked this phenomenon up this image only occurs when refractions of ice crystals are present.

Here are the solar lights coming on around 8:30 in the evenings in the garden….

“Reaching out from the moon were four bright bands of light, forming a nearly perfect cross in the sky. Halo crosses are (apparently) frequently seen around the sun, but to get a lunar one is fairly rare.

It’s worth mentioning that this is not an optical effect from the camera or our eyes – it remains perfectly oriented in the sky no matter how you tip your head/camera from side to side.

Rather, it’s formed by reflections off ice crystals in the air. Humidity in the air condenses into millions of tiny plates of ice, and as they drift down under the influence of gravity and the wind, they all align parallel to each other and to the earth.

*The more I looked at my moon picture…the more it looked like a Lunar-shaped UFO spaceship beckoning to me. 🙂

What I would really love to see is a Moon Bow or Lunar Rainbow…also extremely rare…. but again it needs ice crystals to create the rainbow effect. (Would be even more of a rarity in the low country)

Supposedly Victoria Falls boasts of having more witnessed moon bows than anywhere else. There are four requirements for a moon bow to occur. First, the moon has to be sitting fairly low in the sky. In addition, it must be full, or close to it. The surrounding sky has to be very dark for a moon bow to be visible, because even a small bit of light will obscure the view, and there have to be water droplets in the air in the opposite direction of the moon.

If only the skies could talk…what wonders they could show us and tell us… amazing events witnessed over millions of years!

Thursday night a cousin was stopping by from their trip to the beach on the way home… but she and her grandchildren never appeared and she finally called to let me know they had decided to stay on another couple of days and forgot to call.

Normally that would have been no big deal but I so badly wanted to take the tour of the Old Post Office and see the possibilities of a community cultural art center in its place. I also wanted to champion the cause of keeping Frosty, the Snowman, looking out over the quaint Summerville downtown area from the secret cupola above the  former “home” of the CPW .

*Anne assured me Diane Frankenberger (People, Places and Quilts) had already championed that cause and Frosty will remain in his secret cupola. * Thanks Dianne- I should have known you would look out for Frosty!!!!!!!!!!!!!! I am dying to get in and take a tour of the building…if anybody is returning please let me know and I will meet you there! I want to see Frosty…upclose and personal…I want to know his story!

When I took Eva Cate and Rutledge on the “bird” scavenger hunt in downtown Summerville about a month ago…I let Frosty be a “bonus” question for the children if they found him…my riddle clue was:

“If you think someone is staring down at you…this feeling is true…and here’s one more clue. Look up for the answer-  the last building on the right…a loveable character stands in plain sight.”

I went on to tell that children (after they spotted Frosty amid their delighted squeals) that he is the “Guardian of Summerville” and makes sure everyone is safe and happy walking the streets of Summerville. *Rutledge really took this to heart and he told  me he likes coming to Summerville because Frosty watches over everyone.

Another “bell rang” today…I had my appointment with my oncologist to see if the new cancer drug I am on is bringing my critically low white cell count up…I have experienced some stomach issues on the new drugs and accelerated heart rate sporadically…still felt tired…so was not overly confident about the results of the blood test…but Dr. Jeter came in with a big smile and said my white cell count was now perfectly normal….after only 10 days on the new drug. WOW!

It has been almost 2 years with critical low white cell counts so we were both happy…she thinks the other issues will subside as the body acclimates to the new medicine but she also has to check my liver enzyme levels with this new drug and it takes awhile to get those results back. She re-scheduled me for a two-week follow-up…prayers please that this important test will come back with good results. Ring bell ring! 🙂

So until tomorrow…How many times do I remember Grandmother Wilson telling anyone who would listen…”If you have your health you have everything.” I remember thinking (secretly) that of course I had good health, no big deal, give me money. The wisdom of age…now I think…keep the money give me my health.

Surfing and a warm, cozy fire (I am sure Anne they are using peat at Foxy John’s fireplace) finished up the last day in Dingle….off to Dublin today)

Honey sent me this picture from their back yard…the mountain laurels are in bloom…is there anything more beautiful? Imagine waking up to that every morning.