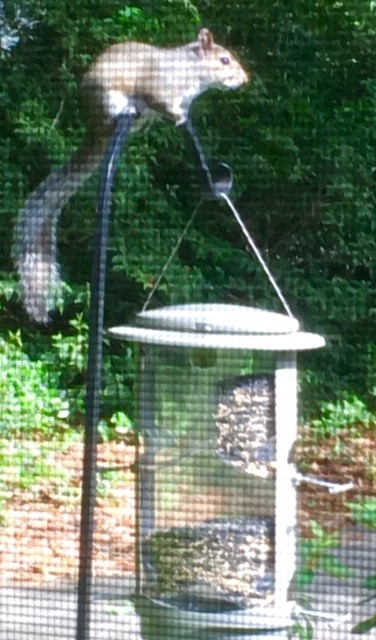 I think it was Mark Twain who once said, “I don’t know if history repeats itself, but it sure rhymes a lot.”  First there was Sammy, initially the stalking cardinal who about demolished both car mirrors on the old green “Vue”….may the “Vue” rest in peace.

Given a second chance, however, Sammy redeemed himself in my opinion when he started feeding his wife by throwing food down to her from the suet cage because she had hurt one foot and couldn’t hold on. (I know the feeling Mrs. Sammy!) And since then Sammy comes and visits if I am typing while he is at the feeder….even flying over to the ledge outside my window for a quick wink.

But now here we go again with another determined stalker…Skippy. I have never had as many problems with squirrels tearing up my garden and knocking down bird feeders (trying to eat the food) as I have this spring.

I have tried everything imaginable as a deterrent with no success. To date the only thing that works is using Hot Pepper Delight in the suet cages…the squirrels won’t touch it and I get to watch all the beautiful variety of birds come eat by my side “office” window. 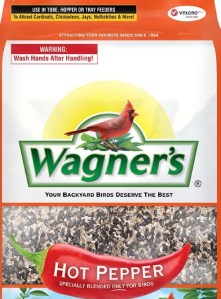 I decided this spring season to add another bird feeder….but I finally had to take it down from the garden….even using Wagner’s Hot Pepper Wild Bird Seed (specifically made just for birds and not squirrels) did nothing to deter the squirrels…they loved the hot bird feed and knocked over the feeder so many time the wire broke.

So I saved my pennies and went back to ACE Hardware and bought a non-accessible squirrel bird feeder (which one of the clerks explained in detail to me how it worked.) It has three different compartments…two smaller ones on top and larger one on the bottom. If a squirrel climbs on any perch, its weight automatically closes the door to the feed opening.

I was so excited….I filled up the compartments and placed the feeder right in front of my den window so I could watch all the birds from my happy room/recliner. I moved the hummingbird feeder to the next window…to watch them too…which by the way Skippy loved also…he must be a sugar addict…he guzzled all the water out in three days on the hummingbird feeder. (Give me patience, Lord!)

After Luke got the new (no squirrel) bird feeder up I was as impatient as a child waiting on Christmas. And then it happened.

Skippy. Skippy looks like a young “teenager” squirrel….kind of small and sleek and unfortunately a gymnast to boot. I watched in glee as he first tried to get his footing on the perches but the doors all slammed closed immediately. Happiness is….but not for long.

*I will have to give it to him…he was persistent…he tried all three perches with no luck and then he climbed on the hook, wrapped his tail around it and pulled open the door upside down. My glee suddenly turned to dismay as I watched him munch his treasure and stare back at me triumphanty through the window.

This was two weeks ago. Every day Skippy arrives and is king of the bird feeder…dominating more time at the feeder than any other poor bird…they can barely get in between Skippy’s voracious appetite.

I figured he would have a hay day while I am gone and not yelling and running out there to shoo him away… like when I am at home. But a miracle happened. Look carefully back up at the bird feeder again. Don’t you notice that the right chamber is completely empty with food remaining in the left upper chamber and the larger bottom chamber?

Why? Skippy is right-tailed…it is the only side that he can maneuver without falling…I watched him try to do his acrobatics on the left chamber and he fell each time…and he can’t reach the bottom chamber. So perhaps….Skippy will have to move on now and find somebody else’s bird feeder to monopolize. Only time will tell.

And who knows….with a little maturity and distance  perhaps we, too, will become friends. Stranger things have happened.

So until tomorrow…. “The early bird may get the worm…but it is the second mouse that gets the cheese.”    🙂