“A Needle in a Haystack” 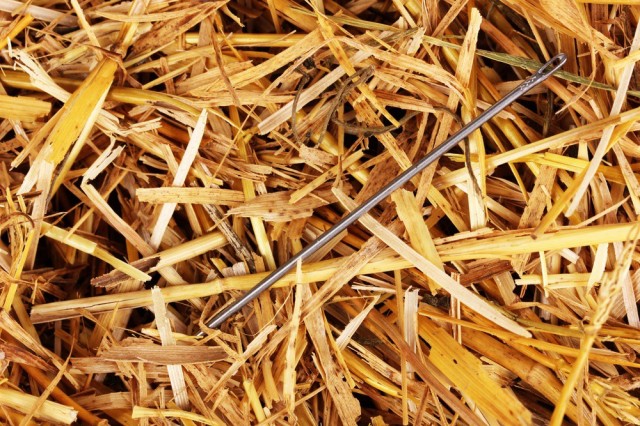 Just a little thought today to encourage all my readers, who like me, continuously lose things….car keys, purses, remotes, drinks….you name it….I can lose it.

My problem is I pick things up but don’t put them back down…at least not where I found them. The remote, for example, I pick it up to turn on or off the television or simply change a channel and then I take it with me wherever I go from that point on…later finding it on the bed in the back bedroom or on the kitchen table where I decided to fix a sandwich…it could and usually is anywhere but where it belongs… on the coffee table in the den. ‘Oh me…of feeble brain…help!’

And every time we do something forgetful like this…and try to re-trace our steps… Don’t we find ourselves making comments similar to… “It’s like trying to find a needle in a haystack” and plop down on the sofa or recliner in total self-exasperation!

Well good news….guess what? You actually can “find a needle in a haystack.”

Case in point: In the Mitford series-by Jan Karon,  Father Tim is trying to cheer up a friend who has given up finding someone they are desperately looking for….making a discouraging sigh and falling back on the cliche…”It’s like looking for a needle in a haystack.”

The familiar phrase makes Father Tim start smiling as he remembers a true story about such an incident following World War II. He tells his friend:

“It happened right after the Second World War when nobody had any money. A sewing machine company held a contest . . . whoever found a needle carefully hidden in a haystack would win a brand-new sewing machine. There were people swarming all over that haystack, hay was flying everywhere. And guess what?” “What?

“The chances were one in a million, but somebody found the needle!”

So until tomorrow… Every time we get discouraged about finding something that is lost….mundane/silly or a true treasure in wealth or sentimentality…think about how many “one in a million” moments we have already won…being born, being born in this country of freedom, loving families and friends…we never need fear losing anything because we already have everything…we are blessed beyond measure.

One of my frequent visitors to the suet cage appears to be maybe a red-headed woodpecker…he has black and white stripes like he is dressed in a tuxedo with a beautiful red head. I love watching him eat at the feeder…he adds “class” to the place in his natural attire!

1 Response to “A Needle in a Haystack”