A “Vignette” of a Thought about Hills and Valleys

An expression we have to get used to in our society….sometimes as a joke at 30, especially 40, and from then on just whenever it pops up on a cake…usually on a candle in the shape of a tombstone is- “Over the Hill.” (Slightly humorous the first few times…not so much so if it continues ad nauseam.)

After everything I have been through for the past decade (in the health department area of my life) I am most thankful for birthdays and simply happy that I might be  ‘over the hill’ but not under it. Still it is strange to think about aging when our feelings inside don’t match our appearances outside. (I have always been so happy that I don’t have to go around looking at myself ….instead I get to turn that dubious occurrence  over to everyone else.)

Yesterday I happened to walk in the den when different celebrities (on television)were talking about age…the one I loved was “We might be over the hill…but who knew there were so many hills still left to climb?”

That thought stuck with me the remainder of the day. How true it is…it doesn’t matter how old we grow…there is no shortage of rolling hills to surround us chronologically. What would life be like if there were no challenges left…no hills to climb to see another beautiful valley or ocean or mountain in the distance?

I have been working on my ancestry sporadically and discovered that the Barbours originally lived in Northcumberland….the border between northern England and Scotland…it is a beautiful land (more castles there per mile than any other in the two areas) with rolling hills…one after another after another. (Title Photo)

*I couldn’t help but think that it was no coincidence that I was born in Cumberland County North Carolina while part of the family lived/lives in Durham, North Carolina…another famous English/Scottish location.

Since I am also working on different sides of the family for the children the surname “Dingle” originates from the term dingle meaning a small wooden hollow among woods and hills. ‘Dingle’ is used interchangeably with “dell.” (A dell meaning a small valley between mountains.) -In fact sometimes these hollows or valleys in England/ Northern Ireland/Scotland are called ‘Dingle Dells.”

There is always so much more history behind nursery rhymes than we can ever imagine…just like there is so much more living to do beyond “over the hill.” 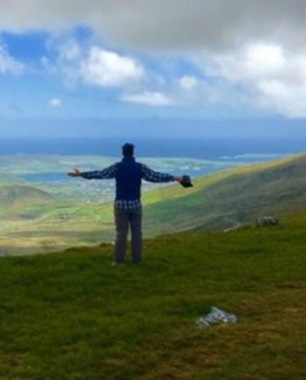 Kaitlyn took this picture of Tommy looking out over the Dingle Peninsula in Ireland… from the surrounding rolling hills and mountains….if it felt strangely like coming home…it probably was.

So until tomorrow…Aren’t we glad that there will always be another distant hill to roll our way and another mountain to climb….Just think…we would never have a valley if we didn’t have a mountain?

“Today is my favorite day”