An Interesting Discovery between the Joy of Giving and Getting

I distinctly remember the Christmas when I realized that the joy of giving was so much more fulfilling and exciting than the joy of receiving….The children were all small and we were over at Poppy’s and Dee-Dee’s ….there were presents everywhere being given out by some of the older children and younger aunts and uncles.

All I wanted to see was the expressions on my children’s faces as they opened their gifts from grandparents, aunts and uncles and lots of cousins. Every time someone would give me a gift I would stick it under my seat so I could go help one of the children open theirs. By the end of this gift opening pandemonium… all my presents were still under my seat.

I wasn’t alone…other adults were doing the same thing…playing with the children’s toys or helping them put some toy together. It wasn’t until some of the relatives asked how I liked this or that present that I realized that by not opening my gifts…I was taking away the joy of others who wanted to see my expressions of joy upon receiving this or that gift.

Giving and getting…it is a delicate tightrope balance, isn’t it?

Psychological Science  has discovered that people experience joy for a longer period of time after giving someone something than they do after getting something themselves. ( Nicole Lyn Pesce-December 24, 2018)

Previous studies have found that customer satisfaction from material purchases decreases rather quickly; that’s why you have to upgrade to yet another new iPhone each year, or a kid loses interest in a new toy within days (if not hours.)

This is known in academia as “hedonic adaptation” — the happiness we get from a particular event or activity decreases each time we experience it, which encourages us to try new things and acquire new resources instead of settling for the same-old same-old every day.

Psychology researchers from the University of Chicago Booth School of Business conducted one study on the giving vs. getting phenomeneon.

“This experiment gave 96 university students $5 every day for five days, and had half of the participants spend the money on themselves every day, while the other half had to spend it on someone else, such as making an online donation to the same charity every day, or leaving the money in a tip jar at the same cafe each morning. The subjects shared their spending experiences and reflected on their overall happiness at the end of each day.

And while both groups started off with similar levels of self-reported happiness, those who spent the cash on themselves reported a steady decline in happiness over those five days — but the joy people felt in giving that $5 was just as strong on day five as it was on day one.”

One theory suggests — whether a gift or a (bonus) salary — can be easily compared to what someone else gets, which can lead to dissatisfaction with what we have.

“In comparison, a kind gesture such as donating to charity often draws less focus on comparison, and instead lets you experience the act of giving as a unique, happiness-inducing event. Plus, science suggests that giving to others reinforces our sense of social connection and belonging, which always feels good.”

Giving of your self…your time, as well as your resources, can, also, lead to health benefits.

“An earlier study from the National Institutes of Health revealed that giving to charity activates a region of the brain associated with pleasure and connection — producing a euphoric “helper’s high.”

And another study from Unitedhealthcare and VolunteerMatch found that volunteering for just 2.5 hours a week can boost your health… as 75% of 2,705 volunteers said pitching in made them feel “physically healthier,” and more than one-third found it helped them to better manage their chronic illnesses, compared to those who hadn’t volunteered in the past year.”

So if we want to give the gift that will keep on giving…then we need to give ourselves..you and the recipient will both be joyful longer …with health benefits to boot.

I know that happiness is defined as a temporary state where joyful is long-term and more enduring…but to tell you the truth…I am feeling really joyful about Clemson’s win over Notre Dame. And I really hate to admit this…but I tend to get more superstitious as the season goes on and the stakes grow higher.

Yesterday when it seemed like both teams were somewhat mired in the first quarter… not doing much with offense…I checked to see if all my Clemson  paraphernalia was in its rightful place. Clemson needed to pick up the pace. Not only was everything set up and ready I had even added a cotton wreath with the Clemson necklace my Ya’s got me for my birthday. *And Tommy and Kaitlyn gave me the knitted Clemson banner! 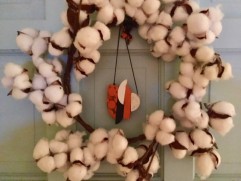 The Tiger (rubber ball) fell out of one of the grandchildren’s Christmas stockings apparently…I found it while sweeping…it is a great de-stresser…during the first quarter I squeezed and squeezed that tiger ball.

Another thing I added was a photo of me with a orange pumpkin instead of a head…I have come down with the head cold/sinus drainage virus going around…so far just a light case but enough to make me feel like I am walking around with a big pumpkin on my  head…but still the color orange worked well yesterday!

*Then I remembered what was probably amiss….we have had rain and gusty conditions on and off for the past few days…I bet my Clemson sign had fallen off the oak tree…the last time it happened we almost lost to Syracuse! Oh no! This must be remedied immediately!

Sure enough…it was on the ground buried in debris and pine needles…I shook it off and put it back on the hook…by the time I got back inside… the second quarter was clipping along and the Tigers started scoring goals one after another. Lesson: Make sure all the pieces are in place before your beloved Tigers hit the gridiron. 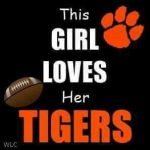 It’s the least this gal can do for them….’cause she ‘sho’ loves her Tigers!