While pulling information on the latest mural about “sweet tea” that has gone up on the side of the Visitor’s Center (artist-Kevin Morrisey)… another link to an old mural in an historic building in Summerville popped up.

It is a mural that has come up for discussion when the CPW (or as we called it the ‘water works’ building) moved this past summer from what had originally been the ‘Old Post Office. It was there when I first arrived (fresh out of college) to teach in the small “hamlet” of Summerville in the early 70’s.

The mural – a four and half foot by 12 foot oil on canvas – is entitled “Train Time” and depicts the “Best Friend of Charleston,” a locomotive that exploded in 1831. It was created by Bernadine Custer. A plaque underneath the mural reports that Custer was commissioned in 1939 by the Works Progress Administration in support of President Franklin D. Roosevelt’s New Deal Program in the midst of the Great Depression.

While re-examining the original deed (when CPW bought it in 1985)….it has been discovered by Patty Walton, executive assistant to the general manager at CPW, that the mural is protected by a deed and cannot be moved. This is great news for the old historical building and all of us Summerville residents who want to keep as much of our past alive for future generations.

Now…as far as the building itself…there is hope that the town might buy it and use it as a public community center for so many talented artists of every design to use. Charlie Cuzzell, former manager of the CPW, took interested residents on a tour of the property which prompted some great ideas.

Cuzzell  liked the ideas so much he took Dianne Frankenberger (owner of People, Places, and Quilts/neighbor to the building) and a few others on a walk through the building to stretch their imaginations.

“We all looked it and said this is the greatest thing in the whole wide world,” Frankenberger said. “We just could see it, we all could see what it could be.”

Her friends-including Dennis Ashley, Will and Dottie Rizzo, Kevin Morrissey, Nancy Jean Nettles and others want to call the space “Public Works.” The organization would promote cultural activities and provide opportunities for broad community involvement.

“There are just all kinds of things that we could do there,” Frankenberger said.

The back loading dock could serve as a venue for performances, there are plenty of areas in the basement — rare for buildings in the area — that would be ideal for children’s art programs.

If the town is not interested in purchasing the building, Frankenberger will write grants and hold fundraisers to see that the “Public Works” idea comes to fruition.

One of the little unknown fun facts about the CPW building is that (none-other) than Frosty the Snowman looks out the top cupola windows at the town below. How long has he done this…I don’t know…but when I read about it…I just had to stop and check it out myself yesterday….(I almost stepped out on the busy town street trying to get the picture…if it had happened Frosty would have been the last smiling face I saw…it could be worse!)

Sure enough there was Frosty…smiling down at the townspeople walking up and down the sidewalks completely oblivious to his smiling face… how many decades have I ridden by the Old Post Office (and later the CPW building) and never noticed Frosty? What a marvelous discovery!!! The obscure secrets and oddities of historical buildings that make up my hometown…hidden treasures. 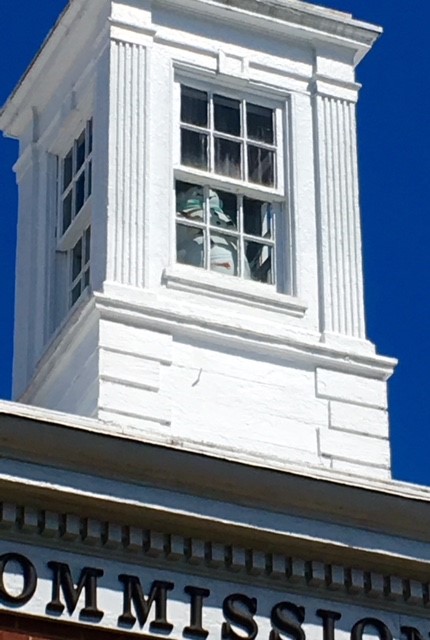 One local news article even mentioned a long-time ghost that apparently has been around this archaic building… dating back to its completion during the Great Depression. To date I haven’t been able to locate a specific story to connect with this ghost….Could he be a letter reading ghost…or a letter writing ghost when the building was the Old Post Office…Or perhaps he even emits an eerie sound…made by gulping water (a ‘ water fountain ghost’ who stays eternally thirsty?) – while the building was the Commissioner of Public Works – the search continues.

What fun it is to discover the wonderful idiosyncrasies that make life so much fun and allow us curious “folk” to widen our imaginations. 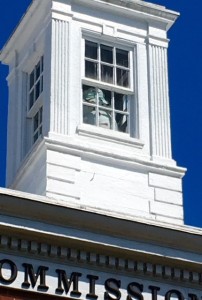 America is my country and Summerville is my “home town”….a quaint refuge in a busy world.

I broke out into song last evening before it got dark (“Anticipation” by Carly Simon)… because while walking through the garden  I saw buds on my Confederate Rose! You might remember back in early summer the stems/leaves atrophied for some inexplicable reason and the whole top of the giant bush had to be removed to stop the disease.

Now it is back to its original height and the buds are starting to pop out…I am so excited! I can hardly wait for the white, pink, and dark pink shades to take over the bush. It made it after all!