A Penny from Heaven

We have all heard the expression “Pennies from Heaven” and several years ago a little poem was written about where they come from and why we, randomly, are selected to find one. It goes like this:

There are many penny stories around and I remember doing some in the older blog posts a few years back. Every penny story I have heard is poignant and makes you stop and bend down to pick it up….your lucky penny.

How many of you, as children, swallowed a penny (or other coin)? According to ER doctors, it is one of the most common children’s emergencies? The parents, if they call first, are usually told to just let the penny run its course, but if it doesn’t naturally come out…to bring the child in for an x-ray.

Mandy and I were talking one day last spring or summer about someone in the family swallowing a coin (an old family story)…Eva Cate got very quiet and later, tearfully, confessed to me (when I spent the night) that she had swallowed one, too, and now was afraid it might hurt her. *When we found out that it had been weeks since the incident, Mandy and I figured she was good to go and she was.

I texted Mollie and asked her if Rutledge didn’t swallow a penny or some coin at some point…I thought I vaguely remembered him doing so…but she laughingly reminded me it was a bean he stuck up his nose that got lodged tightly…not a penny down the throat. ***We want our children to be filled with wonder and curiosity…and swallowed-coins and nose-beans are our reward for endorsing these wonderful traits.

In our Guide Post (Mystery) story today…however a swallowed penny takes a miraculous detour that saves a life.

“You swallowed a what?”

Illinois mom Julie Van Rossum thought her four-year-old, Ellie, was old enough to know better than to put something small in her mouth. Ellie sat in front of her toy cash register, looking mortified.

Ellie wasn’t choking, and didn’t look sick. “Did you really swallow it?” Julie asked. “Why would you do that?”

“I didn’t mean to!” Ellie said. “It just went down!” Now Julie was concerned. Her daughter didn’t seem to be in pain, but Julie dialed her pediatrician, who advised her to keep an eye out to make sure the penny made its “natural exit.” Ellie would be fine. But the coin didn’t appear, that day or the next. Julie and her husband brought Ellie in for X-rays.

The doctor held the scans up to the light. He frowned, circled something fuzzy, not quite in Ellie’s stomach, but farther up.

“Is that the penny?” Julie asked.

No, the doctor said. He believed it was something else. A CT scan confirmed his fears. A tumor was growing on Ellie’s spine. She would need a biopsy. Even if the tumor was benign, it posed a risk of causing paralysis, or worse. It had to come out. The penny was quickly forgotten.

The surgeon emerged from Ellie’s biopsy to deliver his findings. If the tumor had grown any larger, it would have wrapped itself around the spinal cord and pressed against Ellie’s heart, making it dangerous, maybe even impossible, to remove. “We caught it just in time,” the surgeon said. “I can remove it right now.”

After a four-hour surgery and five days in the hospital, Ellie was able to go home. The biopsy later came back positive for ganglioneuroblastoma. A rare, difficult to detect, aggressive cancer. But they’d gotten it all. No chemotherapy, no more surgeries necessary.

Five years later, Ellie’s scans show no sign of cancer. And that penny? There’s been no sign of that either.

So until tomorrow… A “Penny for our Thoughts” might be the best savings plan…particularly if our thoughts take the form of prayers.

A luncheon for Nala (pronounced with a short “a” sound) …as in the Lion King’s girlfriend. We all fell in love with her! She was so good in her crate while we all ate a delicious lunch in her honor and then had time to play with her and watch her eat dried hydrangeas…her favorite outdoor snack! 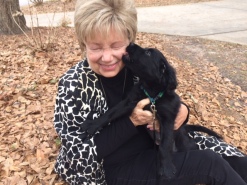 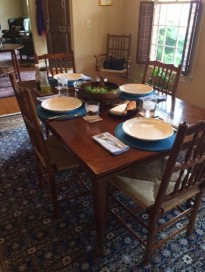 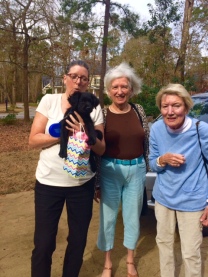 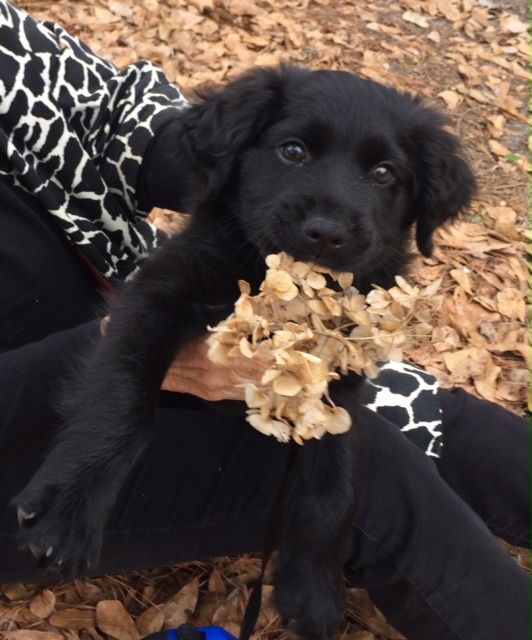 2 Responses to A Penny from Heaven