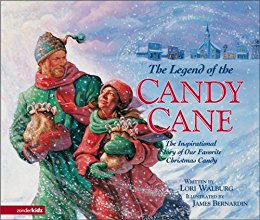 Christmas is here! This is definitely the day that the Lord has made and we must all REJOICE in it! 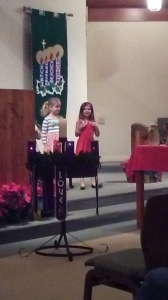 *(Rutledge was the closest to the podium so Bekah couldn’t get him in this photo…hoping John maybe had a better angle…but he was there and right on mark.)

My three assistant magicians (Rutledge, Ady, and Eva Cate) each tapped the magic coloring book with the magic candy canes and the book came alive…from blank pages to outline pages to brilliant color. Metaphorically it is the same process that our old world went through on Christmas Day 2000 years ago…from dull blankness to outlines and shadows of hope to a world filled with color and life…eternal life.

The book cover you see ..is the book that Elizabeth Peterson loaned me to use for the MS luncheon presentation. I certainly took a few liberties with some personal adaptations but the story basically remains the same.

God is so creative…He can take a candy man, a little girl,  a candy cane and use all three as tools to spread the Christmas Story…the Good News.

Being the history teacher…I took a few minutes (before the story started) and gave the historical facts behind the creation of the modern-day candy cane…and then began the story of Christmas from a whole new perspective.

Here is the story…Hope you enjoy it this Christmas Day!

The History Behind the Legend…Did you know?

THE STORY OF THE CHRISTMAS CANDY CANE

It was a dark, cold, dreary November evening when a stranger came to a small prairie town in the Midwest. A man stopped his horse in front of a dilapidated storefront building…some windows were boarded over, some broken out. But the man looked at it and smiled. “It will do”… he said out loud.

The next morning he set to work to make all the necessary repairs needed to open his shop. Passers-by could hear the hammer banging and the saw going, they could smell the sweet, clean scent of fresh lumber and the deep oily smell of new paint.

But no one knew who the man was or what he was doing.

Quickly gossip spread throughout the little town…Everybody seemed to have a different wish as to what the building should turn into and what job the owner should hold.

The mayor was hoping the stranger was setting up a medical office and he, himself, was a doctor. (The mayor always suffered from what he called his “lumbago” and would tell anyone (who got stuck listening) how badly he was “down in his back.” (The nearest town with a doctor was 30 miles away.)

The young women hoped he was a tailor and had brought yards and yards of the finest materials to make dresses for them so they could be beautiful.

The farmers hoped he was a trader so they could exchange their grain for whatever goods or services he offered…bartering was very important to them.

But deep down inside the children…came up with the strongest wish…one they wouldn’t even tell their parents.

Strangely, however, no one introduced themselves or even asked the stranger… who he was and what the store was about, or even if he needed help…they simply waited, watched, wondered, and wished.

But one little girl grew tired of waiting, watching, wondering, and wishing… so one cold morning she bravely knocked on the front door, introduced herself as Lucy, and then asked if he could use some help.

The man smiled warmly and welcomed her in. Inside the store was filled with bare shelves that filled all the walls…in the back room there were many crates and barrels waiting to be opened.

“Actually I could use some help unpacking” the stranger said. Lucy almost regretted offering help as she stared in dismay at all the barrels, boxes and crates waiting to be opened and put up…what if all the crates and barrels just had boring things… like flour or nails in them?

Sighing she opened the first crate and pulled out a large glass jar, and then another, and another, and another…in all sizes…short and stout, tall and thin, some with lids and some without. After she pulled them all out and placed them on the shelves…the stranger opened a box that said “Confections”…what was that she wondered.

Lucy had never heard of that word…but it sounded like medicine to her…she sighed quietly to herself.

Instead out came candy…her favorite candy…gumdrops! “Try some,” said the man and she popped three in her mouth at one time. Quickly she started opening more crates of “Confections”- taffy, lollipops, chewing licorice.

With her eyes wide-open she sputtered…all the children wished for this…we wished so hard.

“Yes I know” said the man quietly “So here I am.” I know of the children’s wants but I also know of their needs and I think I can give them both with one special candy!” Welcome to Sonnemen’s Candy Store. I am John Sonneman.

It wasn’t until late that afternoon that they unpacked the last candy…it was something Lucy had never seen before…a red and white-striped candy stick with a crook on the end. “What is it?” asked Lucy

“This is a candy cane…it is a very special Christmas candy…the most special candy of all.

“Tell me,” Mr. Sonneman said, what letter of the alphabet does the candy cane look like?” “J”…said Lucy proudly! “That’s right, said Mr. Sonneman”…“J” is for Jesus who was born on Christmas day.”

“Now turn it over…what does it remind you of?”

“I know… Lucy exclaimed… It looks like a shepherd’s staff” “Like what the shepherds in the fields held, Lucy replied, while they watched over their flocks by night.”

“Mr. Sonneman…what are the stripes for?” asked Lucy.

The man’s eyes grew sad. “The prophet Isaiah said, ‘By his stripes we are healed’…Before Jesus died on the cross he was whipped and bled terribly. The red reminds us of his suffering and blood shed for us.”

He continued…”But the candy is also white…When we give our lives to Jesus, his blood washes away our sins, making us white and pure as snow…that is the story of the candy cane.”

“Is it a secret?” whispered Lucy. “NO!” replied Mr. Sonneman…”It is a story that needs to be told to everyone…will you help me share it?” Lucy nodded her head up and down vigorously.

So every morning in December Mr. Sonneman and Lucy ventured out into the snow and cold… going to every house in town and farm in the country. They knocked on each door and they told their story…then they left a candy cane with each person and also an invitation to the store’s opening event.

It was Christmas Eve when crowds of people gathered to officially welcome Mr. Sonneman to the town and his candy store officially opened.

Now, however, something was different among the village people. The mayor said he was feeling better than he had in a long time…was it the candy cane…had Mr. Sonneman put something magic in it?

The young women all arrived and were wearing the most beautiful thing of all…smiles on their face. The farmers came eager to trade grain for Christmas gifts for their family. Mr. Sonneman said that no one would go home Christmas Eve without a candy cane wrapped within the paper story of it.

And the children…ran around in circles of delight…a candy store…a wish come true. Everyone now felt it…there was a different feel in the air…hope and happiness. They all shared something more, something bigger,something better than before Mr. Sonneman and his candy canes arrived.

The story goes on to say that Mr. Sonneman lived to be an old man…and as the west expanded and more covered wagons came through the town…(stopping for supplies) on their way to homestead in California and the free land farther out west…Mr. Sonneman would greet each wagon and their family with candy canes and tell them the story behind them.

“Spread the Good News” he always said as the wagon trains departed. And don’t forget…when you reach the Rocky Mountains…”Go tell it on the mountains, over the hills and everywhere.”

Isn’t it wonderful to know that God, our Creator, can create a situation where a candy man, a little girl, and a piece of red and white striped candy can spread His Word from shining sea to shining sea…

So on this magical night…God proudly reminds us,  His Children, of His Son Jesus, Who was born on Christmas Day, to save us from our sins and give us eternal life. The best gift of all! Merry Christmas!

So until tomorrow…I wish each of you wonderful readers a day filled with love…because Christmas is love.

Guess who popped in yesterday?

…My Mery, the neighborhood’s  (once) mail carrier. I had dropped off a poinsettia and card Friday and she showed up to thank me. I discovered her name is spelled “Mery” with just one “r” though she lives like it has two “r’s”…always happy and we had the best time catching up.

This year the family crowd was smaller with Tommy and Kaitlyn gone and Lee, Vikki, and family gone. But what we lacked in size we made up for in volume…at the church service…and back at the house…but it was happy noise at the house. Marcia (Mollie’s mom) had sent some ‘northern weather’ down south in the form of the cutest (sponge-like material) snowballs. A snowball fight was on…we all tried to take photos but the snowballs were coming too fast and I had to defend myself instead of take a photo…any pictures I tried were a true blur! Here’s one, however, during a food armistice.

Eva Cate and Ady Grace bond instantly each Christmas Eve now…as if they see each other every day…so sweet! 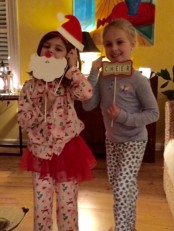 Mandy brought cute Christmas cut-outs that added to the fun too! 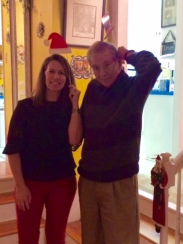 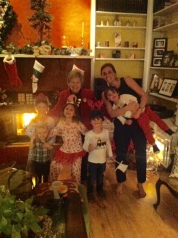 More to share tomorrow…we celebrated Ben’s birthday and much more but I couldn’t find my Iphone so several different people were snapping pictures….will round them up and get a post-date photo album out….

So until tomorrow…Merry Christmas! God Bless us one and all!”