A couple of years ago, a new “variegated” version of Cinderella emerged in movie theaters. It was truer to real life than the earlier animated versions. This Cinderella’s name was Ella and the mantra she was to follow upon her mother’s death was “Have courage and be kind.” 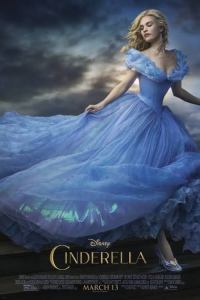 Of all the movies I have seen with Eva Cate, Cinderella has been, by far, my favorite. It was so unexpected, not only entertaining to children, but adults also. The dialogue could be understood (at different levels) by both groups… with adults chuckling at subtle, modern-day expressions and innuendos.

When I went out on the deck yesterday morning before leaving for my post-op check-up (Dr. Scarlett said that the eye 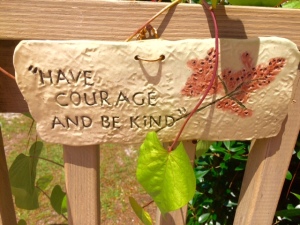 looks great) I saw the plaque Honey made for me with the popular (at least Cinderella fans’ popular) saying on it.

It reminded me of the cutest phone message I got while waiting for my surgery early Thursday morning  in the waiting room of the surgery center.

Walsh had called, with Rutledge in tow, apparently, while Brooke and I were “feeling” our way up Highway 61. I didn’t see that the voicemail had been sent until I was in the  waiting room listening for my name to be called.

I heard Walsh first saying…”Talk to Boo Boo Rutledge….and then there was some whispering and I heard (in a rather strange little “Louis Armstrong”crusty voice) “I love you Boo Boo” rather softly and then much louder “Be B R A V E Boo Boo!!!!! Be B R A V E this morning.”

The first time I heard it, I actually jumped because it was so loud. Then I realized I must have mistakenly moved the volume up while trying to mute the Iphone. (Another good reason to be sitting in the waiting room for cataract surgery.)

When it dawned on me what Rutledge had said, I started laughing and told Brooke to listen. (By then I thought I had turned down the volume…instead I had turned it up MORE.) So I hand the Iphone to Brooke and everyone in the waiting room now heard Rutledge’s message to me.

At first I saw a few slightly irritated-looking stares at the sudden loud noise in the quiet, early morning waiting room…but then I began to hear a chuckle or two around the room…and some nods, as if every grandparent in the room understood the importance of this voicemail.

Immediately my name was called to ‘come on back’ and Brookie was told to stay in the waiting room until they had my vitals checked and my arm hooked up to the IV with numbing drops in my eyes.

Another gentleman’s name had been called back about the same time as mine…and he was in the curtained-off cubicle next to me. The nurse was getting me ready first and then was going to assist another nurse with him.

He must have heard our conversation with me joking around with the nurse that “Eye” didn’t want to feel ‘nutting’ in my “eye” so keep dropping those numbing drops and don’t stop.”

Suddenly we both heard a man’s low voice from the next cubicle…”Be BRAVE Boo Boo….BE BRAVE!” I burst out laughing and caught the nurse up on the joke.

Now the voice (from the next cubicle) apologized for interfering but it was just too perfect a moment not to interrupt, he said.

The nurse told a couple of other nurses about it….so by the time I arrived in the surgery room….the surgeon’s assistant nurse actually whispered to me…”Be BRAVE Boo Boo!’

We don’t usually think about putting the words “kind” (“brave”) or “courage” together…but yet when we stop and think about it…isn’t performing kind acts under intimidating conditions perhaps the most courageous acts of bravery?

Despite having seen all the atrocities of war, this soldier still took the time to feed a kitten with a pipette to rescue him

Afghan man offers tea to thirsty fighting American soldiers. Notice the second cup in his hand and another soldier in the background.

We could go on and on….but being kind during times of duress is a real change agent… like the nice man in the cubicle next to me bringing awareness to a funny situation that lightened up the mood for patients and medical personnel alike.

(I wish there was some way to be able to transfer Rutledge’s voicemail to my blog …but I don’t know how….if it is even possible…I am open to ideas.)

So until tomorrow…Let us remember, that even in difficult situations, kindness can change the outlook and hope of many. 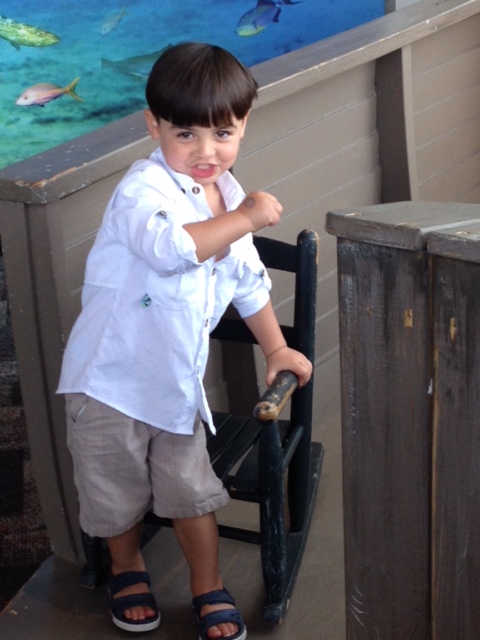 2 Responses to “Be Brave Boo Boo”!