Yesterday morning…around 7:00 a strange pink light filled my bedroom and for a moment, in my groggy state of mind, I thought there was a fire somewhere close by. I tumbled out of bed, found “Pinkie”- my beloved well-worn fluffy robe- put it on, along with some flats, and scurried out on the deck.

This strange, eerily beautiful pink haze was lighting up the sky and yard around me. I cut through to the front porch and once again the beauty of this special phenomenon left me in awe. It was an extra special gift from Creation. What a way to start the day.

Growing up in a small community/neighborhood in North Carolina I remember a ‘Mr. Howard’ would open one of his buildings to use as an ice cream parlor from late spring until early fall. The summer months, of course, were the peak season.

About once a week, in the summer, mother would load us all in the car after supper and take us for some ice cream. We always had to get the same order, a double scoop cone, but we could get our own personal choice of flavor.

Every so often, however, Mr. Howard would bestow an “extra” scoop of ice cream to one lucky child. He always smiled and said the same thing, “I think today is an “extra” scoop day for you!” It was like winning the lottery back then….and it just wasn’t the extra scoop that made us feel so good, it was being singled out as deserving of a special day.

We always said the same thing every week on the way to the ice cream parlor…”I wonder if it will be my turn to get an extra scoop this time.” (Actually David was singled out more than Ben or myself…I think Mr. Howard had an “extra” sense about who might need more “extras” in life than others.) Mother, also, got extra ice cream in her cup….Reflecting back…I think Mr. Howard had a crush on mom.)

The other day, when I was straightening up some books that had fallen sideways on one book shelf, this little book by Archibald Rutledge came tumbling out. One of my favorites called “Life’s Extras.”

A publishing synopsis sums up the message inside the tiny book with this comment:

This is a sweet little book of reveries on the blessings that lie in the little unnecessary things of life. Creation supplies us with just two kinds of things: necessities and extras. This book is one of the extras for which the reader will resolve to be a better person.

Henry Ford, was so enamored of this particular writing of Archibald Rutledge, when it first appeared in the late 1920′, that he ordered a copy for each of his 25,000 workers at the time.

After quickly re-reading it earlier this week, I now understand why Ford did this. He realized that working on an assembly line left little time for creativity or imagination, but helping his workers recognize Creation’s little “extras” in life could add more fulfillment to their lives.

Rutledge. admits candidly in the book, that his faith and spiritual connection to His Creator centers around his belief that God continues to surprise His children with extra “scoops of ice cream” when least expected. God just doesn’t stop with creating sunrises and sundowns…He takes the extra time to paint canvases in the sky of unequaled beauty.He places delicate, dazzling wildflowers among rugged rocks to bring a smile to anyone insightful enough to stop and receive His gift.

The following two original paintings by Anne and Joan reflect for me the “extra’s” in nature that gives us all an extra scoop day.

So until tomorrow…Let us begin each day with this reflection from Archibald Rutledge:

“I remember that the morning star I used to see blazing above the plantation pines, when I was up early to feed the stock, or to be about some other work, used to thrill me with the beauty of its startling radiance.

It seemed all dewy and throbbing – a thing alive, glorious and immortal. God set it there, I felt, as a reminder of His presence, so that we might begin our day with the thought of Him…”

“Today is my favorite day” Winnie the Pooh 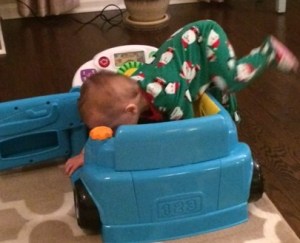 * I don’t know if Jakie  has decided to be an “extra” on the Dukes of Hazzard or what… because instead of crawling through the door to this little car I gave him for Christmas, he has started trying to climb in by diving head first over the other side of the car (with no door)….ending up with dubious results….He keeps getting stuck, head down with his feet in the air. But he isn’t deterred….I  pull him out and back he goes to do it again. It’s what makes Jakie “extra” funny.