I thought long and hard about the appropriate closure for this magical season and a thought suddenly appeared….this had been the season of the “silver packages.”

Of all the stories I have told at the Christmas Eve service this one has always touched many a heart with tears to accompany. It is a powerful story in the lesson of recognizing the difference between needs and wants.

In a nutshell…a little boy growing up in dire poverty of the Appalachian mountains wants a doctor’s kit for Christmas more than anything else in the world. A special train comes around and drops silver packages off each December 23rd for the children to take home so they will have something to open Christmas morning.

Instead of getting a doctor’s kit….over the years he gets gloves, socks, scarves, jackets….all things he really needs but didn’t want….he wanted a doctor’s kit but never got it.

After he grows up…he leaves the poverty of those mountains he was born into and pursues a successful career… thinking he has managed to put the memories of those sad, disappointing childhood Christmases behind him.

But one Christmas Eve he finds himself remembering those childhood Christmases again from the top of tall skyscraper, living in a large city, residing in a penthouse that he now calls home.

Suddenly he sees the past more clearly. Each year when he got the socks, shoes, jackets, or scarves for Christmas he needed them desperately at that moment….because his socks, shoes, holey jackets, and scarves were worn and torn. He had been given exactly what he needed at the time he needed it.

So he finds himself returning to his home, the place of poverty that he thought once he would never  return to again. And he finds himself besides the train tracks on December 23rd watching an elderly man throw silver packages out from the train to the anxious children waiting for their one gift. Memories begin to engulf him.

Suddenly a little girl, with red curly hair, starts running behind the track to catch her gift when she falls…busting up her knees and tearing her stockings. As she sits on the rails crying because her package has fallen into the snow over the embankment….she suddenly sees a nice gentleman pick up her package and bring it to her.

He puts her on his lap and reassures her not to be afraid…everything will be okay and then introduces himself as a doctor while he reaches for his medical bag. He was home again.

In a sense Clemson, too, kept running after and hoping for their silver package…their dream of a national title…their doctor’s kit. In each game leading up to the perfect season and an opportunity to play for a national championship, they were given  exactly what they needed to win over their opponent in the individual games…

So by Monday night….everyone wanted  this national title so badly…it was certainly justified…after all it had been a long time since Clemson had won one…surely they had earned the right to take home such a trophy…to take home a doctor’s kit.

It didn’t play out the way all of us had hoped… or did it? We have to step back from the initial disappointment, like the boy in the story, to pause and look at the game a little differently. As much as we all wanted a national title…what we needed was respect for the ACC and particularly (this past season) for Clemson’s amazing achievements.

Monday night Clemson proved that it was a major contender at a national level and could more than hold its own with the “Big Boys.” (They really were big, weren’t they?) Clemson needed this as much, or more, than a trophy saying they were the best.

They were the best and won many hearts over in their valiant attempt to put up more numbers than their opponent…numbers aside, they got what they needed. Earlier dismissive attitudes towards Clemson began to slowly change…its football program took a leap of faith this year and ended up being recognized as the best in the country in the hearts and minds of (just not those who love them but by…) coaches across the country.

Example: As Jo quoted in her comment: As one reporter said, “We truly had two national champions playing tonight.” 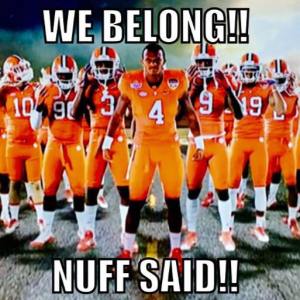 Thanks Ernie Stender (a former student) for this picture you posted on Facebook. Perfect visual to end the article today!

Love conquers all….We love you Coach Dabo and our extraordinary Clemson Tigers! Faith, hope, and love…it was the winning combination!

So until tomorrow…We must remember that sometimes the world doesn’t have to be turned upside down in order for us to see the underlying truth in the amazing arena of football…character wins out over wins/losses and Clemson has character…a class act! 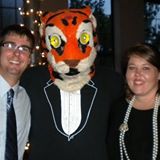 *Dana Howard, Sam and Donna’ daughter, now lives in Clemson after growing up being the daughter of a coach in the football town of Summerville. So she has an unique perspective on this special season….especially how it changed the little town of Clemson she now calls home. Here is an excerpt:

It’s like there’s a direct line of energy running from Phoenix straight to the center of College Avenue & it’s sending out a buzz everywhere–from the bank to the check out line at Publix. Everyone is happy & anxious & excited &… Well, it’s kinda like Christmas was when we were little. It’s just fun.

And I’m grateful for the folks sharing their journeys & I’m even thankful for the folks who usually cheer & dance during 2001:A Space Odyssey, but are being reserved enough to let us celebrate & enjoy the experience. I write a lot on Facebook because I’m not a journal keeper.

I’m not a scrapbooker, but this is a medium I can connect to. And I want to document this moment of pure joy. Because that’s what we’re living smack dab in the middle of–a heart full of joy for the Clemson Tigers.”