Stars in Your Eyes… 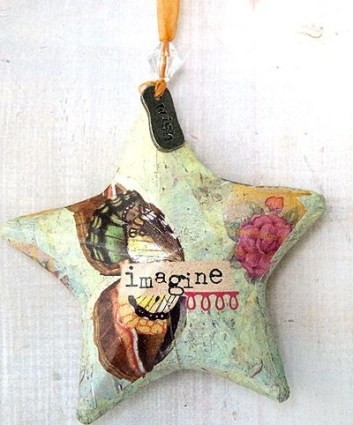 Sometimes… how I arrive at the “thought for the day’ in my daily blogs… is a combination of seemingly unrelated incidences that finally jolt my memories and produce an idea for the blog.

In today’s blog…several reflections merged. I told you the other day how excited I was to just be able to hold and rock Lach for a couple of hours and sing “Twinkle, Twinkle, Little Star.”  Of all the lullaby songs…this seemed to calm him more than any other…and finally lulled him to sleep.

I decided to look up the history behind the song and discovered that the main melody is also shared in the children’s  ABC song, a  version of “Baa Baa Black Sheep,” Louis Armstrong’s “It’s a Wonderful World” (talking part) and even in some of Mozart’s musical works. ( 12 Variations)

Even more interesting…was the fact that this is the first song in a child’s development that triggers the imaginative connection between two different objects…an understandable metaphor for tykes.

When the song says…“Like a diamond in the sky” for the appearance of a star being looked upon at night… small children readily pick up on this analogy.

I received the title photo (gift of a hanging star) for the Christmas tree last year from a friend I met years ago while doing a workshop in Florida.

We had emailed a few times in the past and both loved Kelly Rae Roberts’ artworks…Right before Christmas she sent the “imaginary” star to me with a note: “Always follow the star…always follow your imagination.” ( Since I was sick last Christmas it really cheered me up!)

On Sixty Minutes Sunday night the program had the famous and quite popular astrophyisicist (COSMOS narrator) Neil deGrasse Tyson. He explained why we are comprised mainly of “stardust” ….the same molecules found in us are in the center of stars…we live in the universe and the universe lives in each of us.

Listening to all of this…took me back to my first visit to a planetarium in Chapel Hill, North Carolina (school field trip) when I was in elementary school. Like Tyson…when the lights first went off… leaving all of us school children in the dark…surrounded by (what seemed to be) trillions of stars…I sat there with my mouth hanging open…”star-struck!”

I thought to myself…’You mean there is this whole other universe of stars out there and I didn’t know anything about it..another whole other world that I didn’t even know existed ?’

The stars are mind-boggling.

So now I had four seemingly unrelated connections: a child’s lullaby, a first imaginary connection for a child, a gift from an old friend, and a segment on the universe with a popular astrophysicist. The crucifix, or common denominator, of course, was the stars.

I started thinking of all the idioms and expressions we use connecting stars and one particular part of our anatomy…our eyes. Expressions like: “Star-struck” (astounded) “Stars in your eyes” (wanting to grow up to be famous…a celebrity) a “twinkle in your eye” (a hint of laughter or amusement) “In the wink of an eye” (quickly or suddenly)…we could go on and on.

The fifth and final incident that made me realize I had several pieces of information circling around the universe and stars… came in the form of a poem ….then it clicked. The final connection: Stars and God’s Eyes in our Creation!

” On the day you were born…

And watched as they twinkled and shined.

He tried to find two

of the best He observed,

But he couldn’t quite make up

Then suddenly two of them

danced in the air,

And the rest of them

took to the skies.

On  the day you were born,

You were blessed with the stars

To shine in your eyes!”

All these seemingly unconnected events were just waiting for the catalyst to set my mind in the right direction…God’s Eyes and the stars He sees outside and within us.

So until tomorrow…Let us watch the stars with fascination and awe…in reverence of the Creator who made it all. (If the weather ever clears up)

* Anne is leaving Wednesday for Hawaii for two weeks! So I treated her out to lunch at our favorite “haunt”- Oscars…so yummy! Then we returned back to my home for (a now annual tradition) the stringing of the porch for the moon flowers and morning glory vines to climb.

Anne is called Dr. Morning Glory and I am her assistant…she takes the high road (literally) and me…the low one. She always sends her calling card before arriving…

For the “high road,”in other words, Anne attached the twine to the top of the hooks in the porch ceiling and then threw the twine to me (“low road-er”) to connect it to the planter hooks on the porch floor…We got a rhythm going tossing the twine back and forth…hilarious!

The hardest part was hooking the twine at the ceiling…I know Anne’s arms must have been turning blue for holding them so high for so long…the “low road” (whose job it was to tie them to the planters) was certainly easier…but still we were both “pooped” by the time we finished planting and stringing up the morning glory and moon flower planters. 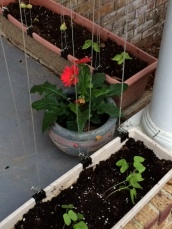 * Actually this was just the ‘tip of the iceberg’…we went to the back yard and garden to finish up planting some left-over seeds…more to come tomorrow.

*When I received these pictures (last night) I got “starry-eyed” …looking at the universe of family residing in my heart.

4 Responses to Stars in Your Eyes…