I think we will get the last laugh with using different friends’ original artworks (instead of some old internet photo) because this painting of fall by my friend-in-law, Joan Turner, just makes me happy and sets the Thanksgiving mood like no other!

When I emailed Joan and asked if she would be willing to share some of her prints from her paintings with the blog…I started hearing beeps as her painting photos began arriving on Outlook. *Joan is the most generous person in the world and the apple doesn’t fall far from the tree in John. Thank you Joan for running to my rescue too!

Monday night, as I was watching Dancing with the Stars.…(I’m hooked)..I perked up as Janel Parrish and Val Chmerkovskiy danced their freestyle to “ And I Would Walk 500 Miles.” It was breathtakingly beautiful but it also made me stop and consider my own journey to date…and what happened last week.

The number 500 shows up in many places…like NASCAR…where it denotes the length of a race in miles or laps ….as in the Indianapolis 500 or the Daytona 500 or our own Bojangles 500 at Darlington. The number 500, thus, symbolizes the ending of a race or challenge.

I also discovered in my research that there is such a thing as ‘angel numerology’ where the number 5 equates to making major life changes…experiencing life through personal choices, and being free enough to stay true to yourself. By adding two zero’s to this number…(the zero symbolizes one’s spiritual journey)…a starting point emerges.

Some of you might remember that just before the “incident” last week I  told you that a wonderful God’s Wink was about to be revealed.  Let me explain what the “wink” was all about…

A few months  ago…I was taking groceries out of the back of my Saturn…when I glanced down at my license plate and shook my head again in puzzlement.

Ever since I got this particular license plate several years back…I wondered if there was some cryptic message involved...Aid 500…Help 500…Was God telling me to aid 500 people? And if so…how in the world could I do that?

I remember I took the groceries in and put them up…then went to my blog and started reading comments…one was from a name I didn’t recognize…he said that the topic I had addressed that day had spoken to him and he wanted to thank me for my help.

Suddenly the light finally came on…AID 500.…..the blog, Becky…the blog! I could help 500 people through the blog. I glanced over at the subscription count….it was a little over 400 subscribers at the time. (some readers don’t subscribe…just google or facebook…so it is hard to get a total number but to be fair I just stuck to the subscriber list.)

I got excited…surely something special would happen the day I reached 500… but what? Last Wednesday… the number shot up to 499! The Ya’s were coming the next day for Jackson’s birthday and the James Taylor concert. I just knew another subscriber would appear and I could surprise the girls….celebrating together!

And then it happened…”John and Becky went up the hill to fetch another email…John took the blow…  Becky cried “OH NO!” …as the blog came tumbling down.”

I pondered the meaning behind it…was the 500 supposed to have been an ending for the blog…I had reached the goal set on the license plate and had ‘aided’ 500 after all… or was this a sign that it was time for a new beginning…starting over with zero…a new spiritual journey closing in on the labryinth?

Then another strange event occurred yesterday as the blog officially went back up (the hill)…As of this moment (Quarter to 8…Dancing with the Stars is coming on soon) the subscriber number is already over 400…and counting…where did all these subscribers come from in one day???? It had taken me almost five years to get the same number ???? Thank you…thank you…thank you!!!!!

And your comments had me in tears…how articulate everyone is!

I honestly don’t where all of this is heading but I have no doubt that in God’s own time… I will find out. God is leading me…of that I am sure…with a leap of faith again…I am following. I hope you will too. How does 500 miles sound? Let’s start!

John Irving perhaps summed up my situation best when he wrote:

“You only grow by coming to the end of something and by beginning something else.”

So until tomorrow…Come grow with me…the best is yet to be.

* “Let it Snow…Let it Snow…Let it Snow” – Jackson left early Saturday to prepare to fly out to meet Matthew…spend a few days on Lake Champlain and then to NYC to spend Thanksgiving with family….the snow is following them wherever they go…I am jealous…would love to see some snow. 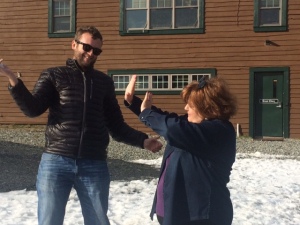 *While I was in my mourning period following the demise of Chapel of Hope Stories (Pt I) my Bradford Pear was drinking up the rain and turning even more beautiful for me…”Come out and Play” it called and when I quit pouting and saw the transformation I knew life is still beautiful…and I was wasting time bemoaning something that was gone. I was only missing out on fall in Summerville!